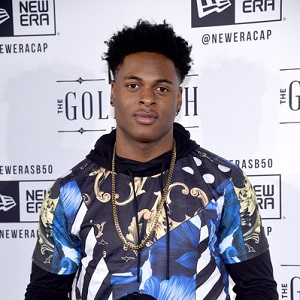 According to our records, Davante Adams is in a relationship. He is having an affair with Devanne Villarreal. The couple met for the first time while attending Frenso State.

In July 2017, he proposed her. The couple had gone the Bahamas for a photoshoot, where Davante secretly planned to surprise propose her. He proposed her on the beach and she said YES! They are now engaged and are planning to get married soon.

Who is Davante Adams?

Davante Adams is an American football wide receiver for the Green Bay Packers of the National Football League (NFL). He played college football at Fresno State. He was drafted by the Packers in the second round of the 2014 NFL Draft.

Davante Adams was born on December 24, 1992, in Redwood City, California. His nationality is an American and ethnicity is African.

He is the son of  Douglas Adams(father) and Pamela Brown(mother). He has one brother and two sisters. As a senior two-way starter, he led the school to a CIF state championship.

He attended Palo Alto School in neighboring Palo Alto, California. He also played basketball and he was considered a two-star recruit in that sport.

Davante Adams was recruited by Fresno State, California, Hawai’i, and San Diego State. He was a multi-sport athlete hat Palo Alto High School, competing in both football and basketball. He was named the Mountain West Conference Freshman of the Year in 2012.

He also was the conference’s Freshman of the Year and a freshman All-American and he was the MVP of the 2012 Hawaii Bowl. In 2013, he received the Paul Warfield Trophy as the nation’s top wide receiver for the Fresno State Bulldogs after compiling 131 receptions, 1,719 yards, and 24 touchdowns.

In 2014, he was selected in the second round (53 overall) by the Green Bay Packers in the 2014 NFL Draft. He signed a contract with Packers. He had a personal-best seven receptions in a loss to the New Orleans Saints. He tallied his first 100-Yard receiving game on November 30 with six receptions for 121 yards in a 26-21 win over the New England Patriots. In 2016, He was named NFC Offensive Player of the Week after catching 13 passes for 132 yards and two touchdowns against the Chicago Bears in Week 7.

Davante Adams: Salary and Net Worth

He has a net worth of $3.1 million but his salary is not revealed yet.

There are no any rumors of Davante Adams and he has not been involved in any types of controversy.


Davante has the height of 6 feet 2 inches. He has black hair and dark brown eyes. His body weighs 98kg.