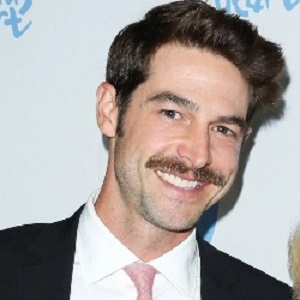 Dave Abrams is a married person. He has been married to famous American actress Jennie Garth since July 11, 2015.

They met for the first time on a blind date in December 2014, and the duo got engaged on April 6, 2015. The couple has not welcomed any children yet.

They separated on August 29,2017, and Dave filed a divorce following a 7-month long separation but the divorce petition was later dismissed on February 7, 2019. Later, they called off their divorce and agreed to settle down and give their relationship a chance.

Who is Dave Abrams?

Dave Abrams is an American actor who is well known for his roles in ‘The Hike’, ‘2 Broke Girls’, and ‘Mann’s World’. He is also well recognized for being the husband of a famous actress, Jennie Garth.

He was born on June 14, 1981, at Virginia Beach, Virginia, USA. Dave has not disclosed any information regarding his parents.

He grew up in Virginia and spent most of the time there and moved to Hollywood to pursue his acting career. Also, it is heard that he has got a sister.

He is fond of golf, football, and basketball. Dave holds American citizenship but his ethnicity is unknown.

He graduated from High School in Virginia Beach, Virginia, USA.

Dave Abrams debuted his acting career in 2006 after he appeared in the hit series ‘That 70s Show’. He portrayed the small role in the series but he became successful in gaining reputation from that small role.

In 2010, he appeared in a thriller called ‘Opera House’ alongside American actress Anna Paquin. After a year, he appeared in films like J. Edgar’, ‘A Mann’s World’, ‘The Hike’ and in hit series ‘2 Broke Girls’.

He is still focusing on his career and we hope that we can see him in several films and television series very soon.

He has an estimated net worth of around $4 million and he has earned that sum of money from his acting career.

There was a rumor about his divorce with his wife, Jennie but the rumor has ended as the couple was seen together on January 29, 2019, at a Los Angeles Lakers basketball game.

Dave Abrams has a height of 6 ft. 2 inches and he weighs 78 kg. Also, Dave has got gray hair and light brown eyes.