American actor Dave Annable is dating his co-star and is a father of one. 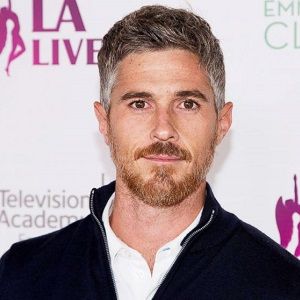 Sisters' ended, I was back to the old game as an actor. Doing pilot season, choosing a script and figuring out what I wanted to do.

Hollywood is full of beautiful people - but who knows how many are beautiful inside?

What is the relationship of Dave Annable?

Dave Annable was in a relationship with his co-star Emily VanCamp. They had worked together in from Brothers & Sisters. But later as she confessed that it was just the love interest in the series and they broke out.

Then on October 10, 2010, he married Odette Yustman. She also starred in the final season of Brothers & Sisters. The couple is now blessed with a daughter Charlie Mae. She was born on September 7, 2015.

Who is Dave Annable?

Dave Annable is an American actor who is famous for portraying the role of Justin Walker in the ABC television drama named Brothers & Sisters.

Further, he is also famous for his role as Henry Martin in the supernatural drama entitled Park Avenue and Dr. Adam McAndrew in the Fox medical drama Red Band Society.

David Rodman was born as Annable aka Dave Annable on September 15, 1979, in New York, the U.S. He belongs to American nationality and ethnicity. Dave grew up in Walden, a small village in New York.

The actor enjoys playing baseball, hockey, and rugby in his childhood days. His mother’s name is Tammi Annable who is of Jewish descent.

Likely, his father’s name is Rodman John Annable who is a Christain.

He finished his schooling at Valley Central High School and completed his graduation in the year 1997. Afterward, he joined the State University of New York at Plattsburgh.

There he gets involved with the student-run Tv Station named Plattsburgh State Television.

The proficient actor starts his journey by playing his first role in an episode of the crime drama named Third Watch.

After it, he appears in several commercials for brands like Mountain Dew, Abercrombie, and Fitch. Likewise, he gets the opportunity to appear in the movies like Spellbound and Black Book.

Dave Annable portrays Justin walker in the popular drama series Brothers & Sisters. there he worked out with Sally Field, Calista Flockhart, and Rachel Griffiths. He also wins an award for his role. Afterward, his career takes a ner turnover and he was well known and loved by many of his fans.

In 2016, he played the role of Teddy Grant on a comedy series entitled The Mick along with Kaitlin Olson. It was also said that he will be joining the WWE Studio action movie Armed Response. Talking about his recent works, he has just seen playing the role of Lee Sutton in a period drama Yellowstone in the year 2017.

The actor has appeared in various popular movies and has always received good appreciation and comments. In the year 2007, he ranks as #7 on People magazine’s annual list of Sexiest Men Alive.

And in 2008, he receives a Prism Award for Best Performance in a Drama Series Multi-Episode Storyline for his portrayal of Brothers & Sisters.

Annable is having a great lifestyle and his movies have been commercially good and earned much. Likewise, in his movie What’s Your Number? collects $30.4 million. It was made under a budget of $20 million. As of 2022, his net worth is around $1.5 million.

In his engagement, he gifted a platinum ring to his wife with a diamond head of 3.5 carats. The ring may cost around $65,000.

He seems to have maintained a good relationship with all of his persons in his personal and professional life and so he doesn’t fall under any kind of rumors and controversies.

This actor stands with a height of 5 feet and 9 inches and weighs 73kg. He has light brown colored eyes and dark brown color hair.

To know more about Marin Ireland, Noureen DeWulf, and Kaitlyn Dever, please click on the link.