Baseball executive Dave Dombrowski is married and a father of two.

They met in 1992 while Dombrowski was serving as general manager of the Florida Marlins and Ross was a reporter at WTVJ in Miami. The couple tied the knot in 1995. 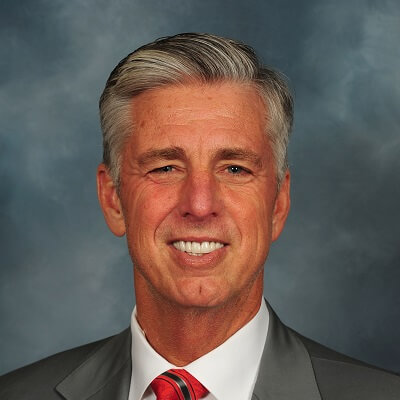 ''I don't think you ever replace David Ortiz with what he brings to an organization or to a community.'' ''We're still in this position where we haven't made a lot of decisions yet.'' ''David Ortiz is an icon. He is one of a kind. But we'll do our best job to replace the offensive aspect, however, we can.'' ''To me, not only he is a good player, but he is a quality person. He is a guy you win championship with.''

Who is Dave Dombrowski?

Previously, he served as the President of Baseball Operations for the Boston Red Sox of Major League Baseball (MLB) from 2015 to 2019.

In his baseball career, the manager was rewarded with several awards including Baseball America’s Executive of the Year award, consequently in 2006 and 2018.

In 1979, Dombrowski briefly attended Cornell University, where he was a member of the Big Red Football Team.

He later transferred to Western Michigan University, where he earned a degree in business administration. In 1998, he also received a Distinguished Alumni Award.

He first started his career as an administrative assistant with Chicago White Sox in their minor league organization.

In his late 20s, he assisted general manager Ronal Hemond.

Dombrowski joined the Montreal Expos front office as director of player development for the 1987 season under Bill Stoneman.

In November 2001, Dombrowski left Florida to become the president of the Detroit Tigers where he served as president and chief executive officer for the 2002 season.

On August 18, 2015, Dombrowski worked as president of baseball operations of the Boston Red Sox.

The 2018 Red Sox won their division for the third consecutive season; the team recorded 108 wins, the most in franchise history. The team went on to win the 2018 World Series, with a pitching staff led by players that Dombrowski had acquired. It was Dombrowski’s first championship since he was general manager of the Marlins in 1997, and he later won the title, Executive of the Year by Baseball America for the second time.

During his time as general manager, the Red Sox were accused of participating in sign-stealing during the 2017 season games against the Yankees and throughout the 2018 season.

However, in February 2020 MLB investigation, he was cleared of any wrongdoing during the 2018 Red Sox season.

The 63 years old baseball executive’s net worth is about $81 Million.

Annually, he earns around $100,000. He earned the money being a professional Baseball Manager.
Dombrowski, though, is taking the fall because of his post-World Series player personnel decisions. And in the end, he has no one to blame but himself. The Red Sox has the top player payroll in the Major Leagues at $242 million and is projected well above the $206 million luxury tax threshold.

Dombrowski has blue eyes and greyish hair. His height and weight are unknown.

You may also know about the net worth, salary, and professional career of Ben Cherington, Danny Ainge, and Jim Thome.