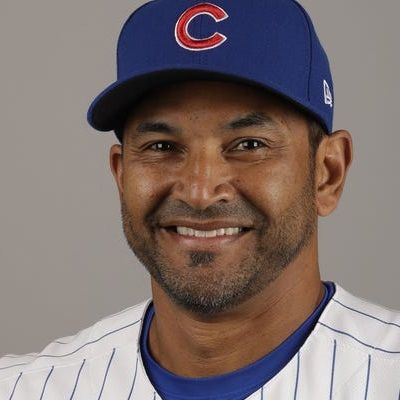 Dave Martinez is a married man. He married his longtime girlfriend Lisa Martinez. Lisa and Dave knew each other from high school days. They were rumored to be dating each other since then.

Their marriage ceremony was attended by friends and family. They are the parent to four children Josh, Jagger, Dalton, and Angelica.

Who is Dave Martinez?

The American professional baseball coach Dave Martinez is known for being the manager for the Washington Nationals of Major League Baseball (MLB). Similarly, he is a former baseball outfielder.

Previously, he served as the bench coach for the Tampa Bay Rays and Chicago Cubs.

Dave was born on 26th September 1964 in Brooklyn, New York to parents Ernesto Martinez and Lilly Martinez. His parents have four children among which Dave is the older child. His other siblings are twins Ernie and Eric Martinez(50 years) and a sister Millie LaBorde(45).

Similarly, his family moved from Long Island, New York to Central Florida. The reason for their migration was because Central Florida is a better environment to raise four children. It was recommended by his uncle. All of his siblings are involved heavily in youth sports.

He attended Lake Howell High School in Winter Park, Florida. In the year 1981, he played for the school’s baseball team which won the Five Star Conference Championship. Similarly, he enrolled at Valencia Community College, where he played college baseball.

Washington Nationals selected him for the open managerial job. He signed a three-year managing contract with the 2018 season with a club option for the 2021 season on 30th October 2017. Similarly, he returned to the Nationals franchise after playing with the club from 1988 to 1991 when it was the Expos. He won the 2016 World Series champion.

Similarly, he signed a two-year contract worth $3.5 million with Rays in the year 1997. He receives a salary of around $1 million from Nationals from his managing career. He has a total value of around $5 million in the current market rate.

Dave has a height of 5 feet 10 inches and weighs around 86 kg. His hair color is salt and pepper and he has black color eyes.

You may also read the age, parents, education, career, and body measurements of Kevin Kiermaier, Kurt Suzuki, and Jason Castro