Dave Matthews is an American singer-songwriter and actor. Dave is married to his longtime girlfriend and has three children. 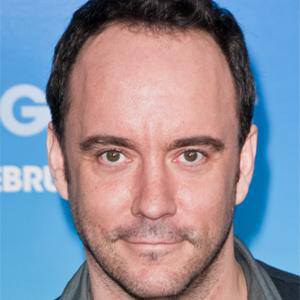 A friend is always good to have, but a lover's kiss is better than angels raining down on me.

We've never played at this place before. This place is big, and I'm kinda nervous, so we're going to make it feel small by pretending we're in a... bedroom. We'll hang off the edge of the bed, take off our shoes and get naked!

I'll lean on you and you lean on me and we'll be okay.

Dave Matthews is a married man. He exchanged vows with Jennifer Ashley Harper on August 10, 2000.

The couple has welcomed three children: twin daughters named Stella Busina and Grace Anne on August 15, 2001, and a son Oliver in June 2007.

He and his wife are currently living together and there is no sign of divorce between the couple.

Previously, Dave proposed to Julia Grey three times, and each time she rejected his proposal.

Who is Dave Matthews?

Dave Matthews is an American singer, songwriter, actor, and record label owner who is originally from South Africa.

He is best known for his role as the lead vocalist, guitarist, and songwriter for the Dave Matthews Band.

He was born on January 9, 1967, in Johannesburg, South Africa. His birth name is David John Matthews. His father’s name was John Matthews and his mother’s name is Allie Laurenzo-Matthews.

He is the third of the four children of his parents. He has two sisters (Jane and Anne) and a brother (Peter). His sister, Anne died in a domestic tragedy at her home in South Africa.

Dave’s dad was working there as a physicist, starting working for IBM. Unfortunately, his father died in 1977 of lung cancer and after a year, the family moved to New York.

He graduated from St Stithians College high school in 1985. After high school, in order to avoid being enlisted in South Africa’s compulsory military service, he left South Africa for New York in 1986.

Before he began his profession, he worked several jobs for his survival in Charlottesville, Virginia. Also, he was part of the local music community and also acted in various local production.

Soon, he began appearing on stage with Tim Reynolds. They met through their mutual friend, Nic Cappon. After working together, he was persuaded to record some of his own songs.

He wrote many songs such as ‘Recently, I’ll Back You Up’, and ‘The Song that Jane Likes’ in 1991. He formed a band named Dave Matthews band alongside Peter Griesar(Left in 1993), Boyd Tinsley, Carter Beauford, Stefan Lessard, and LeRoi Moore.

The band performed for the first time in 1991 for the Middle East Children’s Alliance and the band soon moved to the national stage with the help of the band’s manager, Coran Capshaw. After three years, the band released its first major-label debut ‘Under The Table and Dreaming’. Later, the band released ‘Away from the World’ in 2012.

Apart from his singing career, he is also an actor. He made his acting debut in the Disney film ‘When the Red Fern Grows’ and later starred in ‘Because of Winn-Dixie’ alongside Jeff Daniels and Eva Marie Saint.

He has an estimated net worth of around $300 million and he has earned that sum of money from his professional career.

He has thousands of acres in the Charlottesville area and owns an 18th-century farm named Blenheim Vineyards. He resides in a house purchased at $360,000 in 2001.

He has been successful in maintaining his celebrity status and has not been involved in any rumors and controversies in his personal and professional life.

He has a height of 6 ft. 2 inches and his weight is 78 kg. He has dark brown eyes with brown hair. But, other information regarding his shoe size, dress size, etc. is unknown.

He also gained around 228k subscribers on his YouTube channel.

To know more about Billy Magnussen, Lil Dicky, and Drew Roy, please click on the link.