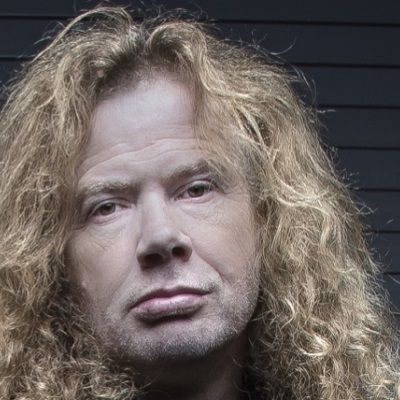 If I were president of the United States, I'd build a great wall along the Mexican border and not let anybody in.

If you guys are going to be throwing beer bottles at us, at least make sure they're full.

What I couldn't say verbally I was able to express physically through the guitar.

Dave Mustaine is a married man. He has been married to his longtime girlfriend Pamela Anne Casselberry since March 3, 1991. The couple is blessed with two children: son Justis David Mustaine (born February 11, 1992) and daughter Electra Nicole Mustaine (born January 28, 1998). Their daughter is a model, actress, singer, and songwriter whereas their son is also a guitarist. The pair are living happily without rumors of extra-marital affairs or divorce.

Who is Dave Mustaine?

Dave Mustaine is an American singer, songwriter, guitarist, actor, and author who is best known as the co-founder, lead vocalist, guitarist and primary songwriter of Megadeth and the original lead guitarist of Metallica.

He was born on September 13, 1961, in La Mesa, California, USA. His full name is David Scott Mustaine and he is currently 57 years old. He was born to mother Emily Mustaine and father John Mustaine. Also, he has a sister named Michelle Mustaine.

Dave began his career from the band ‘Panic’ in 1978. The band included Bob Evans on bass, Tom Quecke on rhythm guitar, Mike Leftwych on drums, Pat Voeks as a vocalist and Dave Mustaine as the lead guitarist.

Unfortunately, Mike Leftwych and a soundman were killed in a car crash and the band began separating in 1981 and also rhythm guitarist Tom Quecke also passed away.

Then, in the same year, he joined Metallica as the lead guitarist and his membership with the band ended in 1983. However, he released early from the band because he was struggling with alcohol and drug abuse, overly aggressive behavior, and personality clashes. After he left the band, in April 1983, he founded the band ‘Fallen Angels’ alongside Matt Kisselstein, Dave Ellefson, Greg Handevidt, Robbie McKinney, Lawrence Renna (‘Lor’ Kane). But, the band was later renamed to ‘Megadeath’.

The band released several albums like ‘Killing Is My Business… and Business Is Good!’, ‘So Far, So Good… So What!’, ‘The System Has Failed’, ‘Cryptic Writings’, ‘Endgame’, and many more.

Talking about his awards and nominations, he had earned 12 Grammy nominations and a Grammy Award in 2017.

He has an estimated net worth of around $20 million and he has earned that sum of money from his professional career.

It seems Dave has not been involved in any rumors and controversies in his personal and professional life.

He has been recently diagnosed with throat cancer in June 2019 and the band will have to cancel most of their 2019 tour dates.

He has a height of 6 ft. inches and she weighs 84 kg. Also, Dave has brown eyes and blonde hair. He wears shoes size of 11(US).