David Alaba is one of the World's greatest professional football players. He is also a child prodigy, national hero, and brilliant Bayern Munich footballer! David is in dating Shalimar and has a kid together. 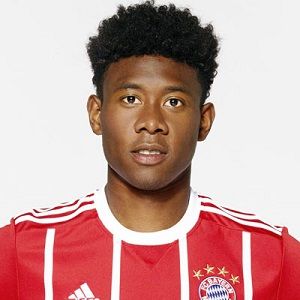 Austrian international footballer is in a relationship with Shalimar Heppner. Shalimar is from Germany. They had a baby at the end of 2019. They keep sharing their cute pictures in their Instagram handle.

Previously, David was in a relationship with the handball player Katja Butylina in 2010. But later they broke up due to some differences.

Who is David Alaba?

David Alaba is a professional football player from Austria. Currently, he plays for the German giant Bayern Munich in Bundesliga. Furthermore, he represents his national team, Austria at the international level as a left-back and midfielder.

David was born on 24 June 1992, in Vienna, Austria to Yoruba Nigerian-Filipino ancestry.

He has a sister named Rose May Alaba and does not have any brothers. Moreover, he grew up along with his sister.

As a child, David had a keen interest in football and began to play at a very early age.

Talking about his education, there is not any information regarding it.

David Alaba began his career with his local club, SV Aspern in Aspern. Later, he joined the youth setup of FK Austria Wien at the early age of 10. Prior to Bayern Munich, he has played five matches for Austria Wien’s reserve team.

Additionally, he started his Bayern career for the under 17 and under 19 teams. In the 2009-2010 season, David got a promotion and got his seat to the reserve team. On 29 August 2009, he scored his first professional goal for FC Bayern Munich II.

In January 2011, he also moved to TSG 1899 Hoffenheim on a loan. During the 2011-2012 season, David began to play regularly for Bayern Munich and also reached the UEFA Champions League final. However, he couldn’t play in the final due to his suspension.

Apart from that, he has also scored the seventh-fastest goal (25.02 seconds) in the Champions League history to make a 2-0 win over Juventus. As an international player, David has represented Austria at the U17, U19, and U21 level.

Later in 2009, the 25-year-old footballer made his debut for his senior team against France. In addition, David netted his first-ever international goal for Austria on 16 October 2012 in a World Cup Qualifying game against Kazakhstan. So far, he has scored on various occasions for his country.

So far, David has won many awards and achievements in his career. Furthermore, he has won the Bundesliga six times in his career which includes five consecutive trophies from 2012 to 2017 as well as a Champions League in 2012-2013.

The Austrian footballer has also won the Austrian Footballer of the Year six times from 2011 to 2016. Besides this, he was also named as the Austrian Sports Personality of the Year in 2013 and 2014 followed by FIFPro World XI 2nd and 4th team.

His annual income is $9 million per annum.

David’s net worth is estimated to be over $20 million.

Once there was a rumor of David that he will be transferred to Manchester City. However, the Austrian footballer denies the news and stayed at the German side Bayern Munich. Besides this, he has never been the topic of controversy yet.

David Alaba has a height if 5 feet 11 inches and weighs 75 kg. Furthermore, he has black eyes and black hair.

Moving towards his body measurements, he has 37 inches chest, 14 inches biceps. and 30 inches waist.

Shanna Moakler has a shocking weighloss! Know more about her weightloss journey