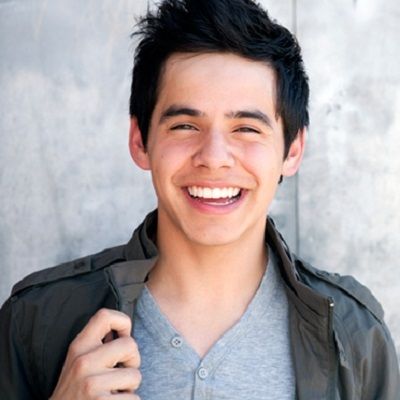 It's really crazy because it's like you've just been working. You know, you go out on stage every week and come back and rehearse and rehearse and then just all these people, out of nowhere, are like 'David!' and stuff. It's like, 'How do you know my name?' It's just bizarre because it doesn't seem real that so many people would freak out.

Previously, he was in a relationship with an actress Fernanda Andrade and a singer Jordan Pruitt in the year 2009.

Who is David Archuleta?

David Archuleta is an American singer, songwriter plus an actor. He has also appeared in a reality singing show, American Idol S7.

This singer was born on December 28, 1990, in Florida, the US with a birth name David James Archuleta. He belongs to the mixed ethnicity of Basque, Danish, Irish, German, Iroquois Native American, and Honduran.

His father Jeff Archuleta, a jazz musician and his mother Guadalupe Mayorga, a salsa singer and dancer. He has two brothers Jazzy and Danial plus two sisters Amber and Claudia.

In 2009, David graduated from Murray High School and he is also a graduate of Barbizon Modeling and Acting School.

David Archuleta was inspired by Les Miserable’s video and started singing from age six. At the age of 10, he participated in the Utah Talent Competition and won the child division. He became Junior Vocal Champion at age of 12.

Archuleta participated in the seventh season of American Idol in 2008 and finished in the second position. This singer released in the first debut album Crush in August 2008. Later, his album debuted at number two on Billboard 200 chart and has sold over 900,000 copies worldwide.

Later, he released his third album, The Other Side of Down in October 2010. Archuleta had sold 1,108,000 albums in the United States in 2012. The same year, he released his fourth album Forevermore in the Philippines which was the first Original Philipino Music album.

In 2012, Archuleta released his fifth album Begin in the United States. On March 26, 2013, he released his compilation album No Matter How Far. Later, he released his albums ‘Postcards in the Sky‘ and ‘Winter In The Air‘ respectively in 2017 and 2018.

This singer has also sung on several episodes of TV show Star Search. In 2007, he received his ticket to the Hollywood auditions at the San Diego tryouts. In the 1970s themed week, he sang John Lennon’s song ‘Imagine’.

Archuleta sang ‘In This Moment’, ‘Imagine’ and ‘Don’t Let The Sun Go Down On Me’ in the finale of American Idol.

The average salary of this singer is $79,000. Meanwhile, according to some sources, his estimated net worth in 2020 is $5 million.

David was rumored dating singer Charice Pempengco. He and his family suffered from Posttraumatic stress disorder after American Idol.

There has been a rumor that if David is a homosexual. This singer sparked controversy when he shared a quote as Anti-Gay on Twitter.

David Archuleta is 5 feet 6 inches tall and weighs 68 kg. He has black hair and dark brown eyes. His shoe size is 9 US.

Evie Clair: her soulful singing, her father’s battle with cancer, her family ordeals and her great achievements! Read on for more!