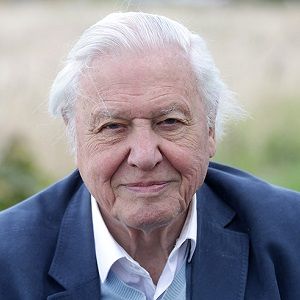 The question is, are we happy to suppose that our grandchildren may never be able to see an elephant except in a picture book?

An understanding of the natural world and what's in it is a source of not only a great curiosity but great fulfillment.

I just wish the world was twice as big and half of it was still unexplored.

What is the relationship of David Attenborough?

David Attenborough is a married man. He is married to his longtime girlfriend. In 1950, he married Jane Elizabeth EbsworthOriel. They also have two children, Robert and Susan. His wife Jane died on 16 February 1997. There seems no any other relationship in which he was involved.

Who is David Attenborough?

David Attenborough is a British broadcaster and naturalist. His contributions in broadcasting and wildlife film-making made him more popular. Moreover,  he directed the programs responsible for the output of the BBC channels.

David was born on May 8, 1926, in Isleworth, Middlesex, England. He grew up in College House on the campus of the University College, Leicester, where his father, Frederick, was principal. His mother’s name is Mary Attenborough.

He has one elder brother, Richard, who became an actor and director. Likewise, he also has a younger brother named  John, who is now an executive at Italian car manufacturer Alfa Romeo. He has two sisters: Irene Bejach and  Helga Bejach.

From a young age, he was interested in collecting different fossils, stones, and natural specimens.

He received his education from the Wyggeston Grammar School for Boys. In the year 1945, he won a scholarship from Clare College of Cambridge University. And he attended there from which he obtained a degree in natural sciences. In 1947, he received an opportunity for national service in the Royal Navy and he spent two years stationed in North Wales and the Firth of Forth.

He worked for the Navy for some time and he joined the BBC in 1952. Consequently, he became the producer for the Talks department. Then his professional career has a new great start. He did three-part series ‘The Pattern of Animals’ which led to a series about an animal-collecting expedition. Zoo Quest was the first broadcast in 1954 and became the first of his many BBC Natural History Unit productions.

He appears in the BBC Natural History Unit in 1957. He has formed the Travel and Exploration Unit, which would help him front Zoo Quest as well as the Travellers’ Tales and Adventure series. David was the one who resigned from the BBC to study social anthropology at the London School of Economics in the 1960s.

But again working for some time, he returned to the BBC as controller of BBC Two. He became the controller of BBC Two in the year 1965. He included music, arts, entertainment, archaeology, experimental comedy, travel, drama, sport, business, science, and natural history in the schedule. In 1967, BBC Two started its color broadcast. At that time, he was the one who introduced the televised snooker and the BBC2 Floodlit Trophy to Television.

In 1969, he directed the programs responsible for the output of the BBC channels.  In 1975, he presented different shows like The Tribal Eye, The Explorers, and Fabulous Animal. After a year later BBC signed a co-production deal with Turner Broadcasting and produce ‘Life on Earth’.

Likewise, he also broadcast  ‘The Living Planet’. Talking about his 1990s work, he presented Life in the Freezer and The Private Life of Plants. Likely one of the shows titled, The Life of Mammals, which was broadcast in 2002 used low-light and infrared cameras to reveal the behavior of nocturnal mammals. And it was one of the popular shows.

Likewise, -Life in Undergrowth exploited macro photography to capture the natural behavior of very small creatures. Life in Cold Blood gets broadcast in 2008. And after it, he completed his collection of programs. His programs all contain the major groups of terrestrial animals and plants by showcasing reptiles and amphibians.

Talking about his recent work, including 3D documentaries for Sky 3D. It is the return of Eden with the second series which consists of the origins of the vertebrate.

David received different awards several times. In the year, 2002 BBC poll named him among the 100 Greatest Britons. He also stands among the top ten “Heroes of Our Time” according to New Statesman magazine. And again in  2006, Reader’s Digest Poll named him the most trusted celebrity in Britain.

The following year he won The Culture Show’s Living Icon Award. Moreover, he wins the BAFTA Desmond Davis Award, the Royal Geographical Society’s Cherry Kearton Medal and Award, and was also awarded the Commander of the Order of the British Empire (CBE).

In the 1980s, he received a BAFTA Fellowship and a Knighthood. Moreover there he received a Fellow of the Royal Society (FRS) name. He received the Commander of the Royal Victorian Order (CVO) for producing Queen Elizabeth II’s Christmas broadcast for a number of years. Other distinguished awards he received in the 2000s are the Michael Faraday Prize awarded by the Royal Society the Descartes Prize for Outstanding Science Communication Actions, and the Order of Merit (OM).

David Attenborough: Salary and Net Worth

He is an English broadcaster and naturalist who has developed a good career now. Likewise, his net worth is $35 million as of 2022. But his salary is unknown.

David doesn’t have to involve in any kind of rumors and controversies. So he seems to have a good relationship with all in both personal and professional life.

He stands at a height of 5 feet and 10 inches. Likewise, its weight is unknown. Moreover, he has blue-colored eyes and white-colored hair. And other information about his body measurements is unknown.

Also get to know about family, career, net worth, and bio of famous personalities like Sveslosky Scott, Abbey Clancy, Phyllis Smith, Lorene Scafaria.