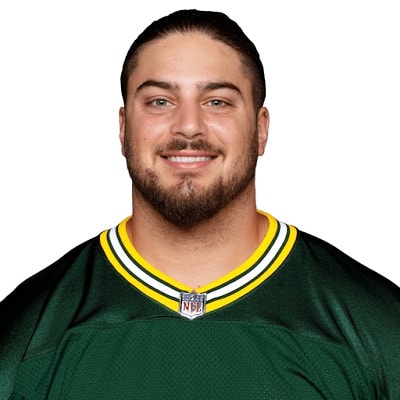 David Bakhtiari is currently in a relationship. He is dating his gorgeous girlfriend Frankie Shebby, a food blogger. The pair seem very happy with each other. They have not revealed their future plsns. Hope, they will soon tie their knot.

Previously he dated Kerra Lee Schroeder, a volleyball player but they broke up not long after dating.

Who is David Bakhtiari?

David Bakhtiari is a famous American football player who is playing the offensive tackle for the Green Bay Packers of the National Football League (NFL).

He was born on September 30, 1991, in San Mateo, California, USA. His birth name is David Afrasiab Assad Bakhtiari. He was born to father Karl Bakhtiari, a real estate businessman and mother Debbie Bakhtiari.

He has three siblings: a sister named Danielle Bakhtiari, an older brother named Eric Bakhtiari, a former American football player, and a brother is Andrew Bakhtiari.

David holds American citizenship and his ethnicity is a mix of Iranian, Icelandic, English.

He attended the Junípero Serra High School and then majored in Communications at the University of Colorado.

David was named the team captain while he was in sophomore year in his high school. In addition, he was named an Honorable Mention All-West Catholic Athletic League, All-Metro (Bay Area).

Moreover, he played for Colorado Buffaloes football team while he was at the University of Colorado from 2009 to 2012. In January 2013, he announced that he would be in the 2013 NFL Draft after playing for the team for three seasons.

Moreover, David Bakhtiari was selected by Green Bay Packers in the fourth round and 109th overall of the 2013 NFL Draft. Since then, David has had several injuries including a serious back injury.

Similarly, he has played in all 16 games of his sophomore season. Also, David was named to the NFL second-team All-Pro squad in 2016 and 2017.

David Bakhtiari was ranked in the 91 number on the list of NFL Top 100 Players of 2018. As a senior, he received the name All-San Mateo County after winning the 2008 WCAL Co-Championship with Bellarmine College Preparatory.

He has an estimated net worth of around $18 million and he has earned that sum of money from his professional career. Similarly, he was signed by the Green Bay Packers to a four-year contract extension worth $48 million on September 13, 2016. Also, his annual salary in 2018 was $1 million while his roster and signing bonuses are $6,375,000 and $3,200,000 respectively.

David has been successful in keeping himself far from rumors and controversies in his personal and professional life.

David Bakhtiari has a height of 6 ft. 4 inches and weighs 141 kg. Also, he has blue eyes and black hair. His hand is 9.5 inches wide and his arm length measures 34 inches.