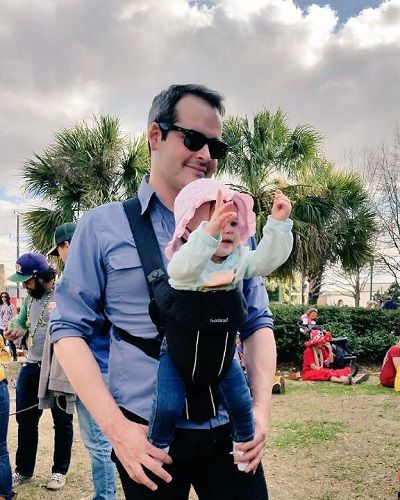 CBS reporter, David Begnaud shares his experience collecting the information of the Hurricane that occurred in Puerto Rico. He joined the news network in the year 2014.

He has been reporting on four hurricanes back to back in the previous months ago. He has also been noticed and appreciated for his on-the-ground in-depth reporting.

Currently, he is a correspondent for the CBS News in New York where he does more of in-studio work. He said,

“Being in New York will also allow him ‘to do some projects.’”

The CBS Reporter, David Begnaud has shared his experience and opinions about having a journey in Puerto Rico for working on the hurricane occurred recently. Begnaud recalled and described the start of the journey.

“It rang three times before I was able to walk outside and take the call. And they said, can you go to Puerto Rico? That was like 30 or 40 days ago.”

During that time, David had spent weeks covering the effect and aftermath of Hurricane Maria on Puerto Rico.

“Maria is unlike any hurricane I’ve covered. It has surpassed anything I’ve reported on before in terms of devastation. After the hurricane, (it has been) an endless emergency.”

David Begnaud is familiar to storms. However, he said is something that is very different. Puerto Rico had gained worldwide attention thanks to the large-scale suffering. David has not only been on the scene there. He has also covered hurricanes Harvey in Texas, Irma in the Caribbean and Florida and Jose.
According to him:

“I’ve never done four hurricanes back to back. You know, Harvey is memorable for people’s ability to rush in to help – the overwhelming response. And, what I’ve come to learn, is that civilians are able to meet the efforts of the federal government and, more often than not, do better. What made Irma so memorable was how it hopscotched. We couldn’t keep up with where it was going. But Maria has surpassed anything I’ve reported on before in terms of devastation.”

David Begnaud also reported about food and water shortages during which families were allowed just six water bottles a day. Flooded streets could not drain because the drains were clogged with storm debris. People were having the problem of power and generators.

“It can’t be overstated how delicate the situation is here. Doctors have been having to refuel generators themselves. I saw one doctor who spilled gas on his lab coat because he was refilling the generator in between seeing patients. He was doing this three minutes before he walked in to see a patient.”

However, Begnaud and his team were lucky that they were provided the lights and was allowed to continue broadcasting to the world despite the shortage of the supplies.
He recalled:

“At one time. we were running out of water and food. Even though we had stocked up on it, we went through all of it. The hotel had food and prepared three meals. We lucked out here.”

Begnaud explained about his experiences and about what he learned working as a reporter in Puerto Rico. He said:

“That experience has humbled me. I’ve never known journalism to be the type of lifeline that it is here in Puerto Rico. In this day where the president has made the term ‘fake news’popular, nothing has been fake about what journalism has been able to do for the island of Puerto Rico. The desperate are starting to have hope.”

Begnaud had realized that he has come away from a different person than when he started the assignment. He believes that he has grown in more ways than one. He considered this a life-altering experience for him. He added:

“It has changed me. It has matured me in a way that no other story ever has before. In doing interviews, no less than four people have said, something seems different. I didn’t understand what people meant. But I think it’s similar to what our war correspondents feel. There are moments of humanity that leave me feeling fulfilled. And, this job has taught me, the stories that resonate are the stories that inspire or break you heart.”

According to the sources his salary is around $90,000 per month and net worth is around‎ $5 million.

David Begnaud is an American journalist. Currently, he is the CBS News correspondent. Previously, he has worked as a reporter in a couple of TVs such as Ora TV, KTLA, and KSLA TV. More bio…