David Byrne is an Academy Award-winning singer-songwriter and composer.

David Byrne is currently single. Previously, he was married and has also been romantically involved with several women.

He was married to the costume designer, Adelle Lutz. The couple met in Japan. They exchanged wedding vows on 18 July 1987. From their marriage, the couple has a daughter named Malu Abeni Valentine Byrne. She was born in 1989. In an interview in 2016, Malu spoke about her middle name, ‘Abeni’. She revealed that it is a Nigerian work which means ‘We asked for her and she came to us’. The couple was having a hard time getting pregnant and when she was finally born, one of her parents’ friends came up with the name. The couple divorced in 2004.

Before his marriage, in 1981, he was in a relationship with Toni Basil. After breaking up with her, the musician dated Twyla Tharp. After his divorce, he dated Louise Neri. His most recent relationship was with the artist, Cindy Sherman. The couple dated from 2007 to 2011. 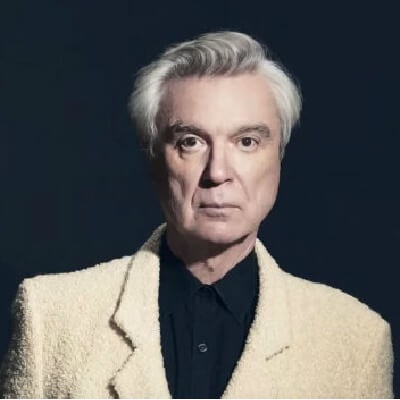 To some extent I happily don't know what I'm doing. I feel that it's an artist's responsibility to trust that

Punk was defined by an attitude rather than a musical style.

Who is David Byrne?

David Byrne is an American Academy Award-winning singer-songwriter and composer. He is well-known as the frontman of the New Wave/punk band, ‘Talking Heads’. His band was inducted into the Rock and Roll Hall of Fame in 2002.

When he was two, his family moved to Hamilton, Ontario. Similarly, his family once again moved to Arbutus, Maryland when he was eight or nine. He has a younger sister named Celia Byrne.

His father was an electronics engineer while his mother was a teacher. His family had to leave Scotland because of two reasons. one was his father’s job and the other was because of the tensions in the family because of his parents’ mixed marriage.

His ethnicity is Scottish, and Irish.

Talking about his education, he went to Lansdowne High School in southwest Baltimore County and graduated from there. Following that, he attended the Rhode Island School of Design and the Maryland Institute College of Art before deciding to drop out of college.

David Byrne formed the band, Talking Heads with Chris Frantz. They performed the band’s first gig in 1975. In 1977, they included Jerry Harrison, a multi-instrumentalist in the band.

The same year, they released their debut album, ‘Talking Heads: 77’. The single ‘Psycho Killer’ from the album found its way to the Billboard Hot 100 Chart.

1978, they released their second album ‘More Songs About Buildings and Food’. This album became popular for its mix of funky bass, country, and punk music.

Following the success of this album, the band brought out two more albums, ‘Fear of Music (1979) and ‘Remain in Light’ (1980). Both of these albums went Gold in America. Since then, the band took a hiatus until 1983. Byrne started his solo career and released his debut solo album ‘My Life in the Bush of Ghosts’ in 1981.

In 1988, he established the world music record label, Luaka Bop. In 1989, he released another solo album titled ‘Rei Momo’. During the 90s, he released three albums including his famous self-titled album, David Byrne in 1994. In 2001, he released ‘Look into the Eyeball’ (2001). In August 2016, he was featured on ‘Snoopies’ on the album, ‘and the Anonymous Nobody…’ by De La Soul which remains his latest contribution in music.

How much is David Byrne worth?

David Byrne has an estimated net worth of around $40 million. There is no information about his salary. An average American musician earns around $42k per year. However, David earns much more than that per year and has a six-figure annual salary.

His eye color is brown and his hair color is black. He stands at a height of 6 feet. However, there is no information about his weight and other body measurements including shoe size, etc.

You may also like to read the Bio, Career, Body Measurements, Net Worth, Social Media, Relationships, and more about Hugh McDonald, Jim White, Jon Foster, and more.

Laura Byrne talks of her two miscarriages on her podcast!