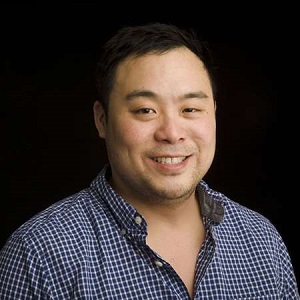 Pondering an individual existence of David Chang, he is a married man. He is married to his longtime girlfriend, Grace Seo Chang. The couple tied the knot in the year 2017. There is no information on his marriage details.

Talking about the past relationships of David, he has not shared anything about it.

Who is David Chang?

Tall and handsome David Chang is an American renowned restaurateur, author, and television personality. He is best known as for his appearance on Top Chef: All-Stars, MasterChef Australia, and The Mind of a Chef. He is the founder of the Momofuku restaurant group and opened Michelin star-rated restaurants in New York, U.S.A., Sydney, Australia; and Toronto, Canada.

America restaurateur David Chang was born in Vienna, Virginia on 5 August 1977. He is of Korean ethnicity and has an American nationality.

He was raised by two elder brothers and a sister. His mother’s name is Sherri Chang and father’s name is Joe Chang. His father was a South Koren immigrant who owns a golfing goods warehouse and two restaurants. Peter Meehan is his one of the closest friend.

When he was young, he was fed up with eating Korean food so when he became a cook, he did not want to cook his home-cooked meals.

Chang studied at Georgetown Prep and he majored in religious studies at Trinity College. He was a competitive golfer in his childhood days. He attended his training at New York City’s French Culinary Institute.

David Chang started working part-time at Mercer Kitchen in Manhattan while he was still learning in the French Culinary Institute. Later, he moved to Japan and worked at a small soba shop, followed by a Park Hyatt Hotel restaurant in Tokyo. After returning the States, he worked at Café Boulud where his idol, Alex Lee had worked.

In 2010, Chang appeared in the fifth episode of Season One of HBO’s Treme alongside with other chefs. He also became the guest judge in the reality cooking show including Top Chef: All-Stars and Masterchef Australia. He released is first writing Lucky Peach food magazine in summer 2011.

David Chang: Salary and Net Worth

Although it’s hard to put up an actual annual salary in a figure, his net worth is estimated to be $50 million. There is no doubt that he is living a luxurious lifestyle.

It is rumored that David Chang is going to open up his new restaurant in Las Vegas. David is in news because of his controversial feedback on the taste of food.

David has black hair and black eyes. Furthermore, there are no details regarding his body measurements.