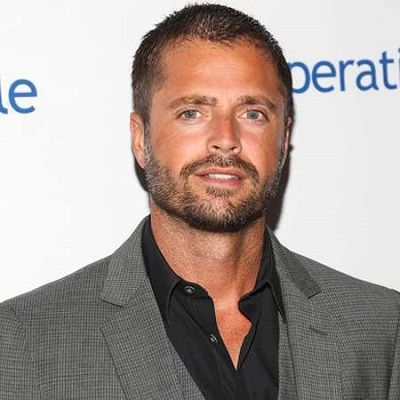 Give me a part in a film, and I'll show you I'm not just a heartthrob

I'm just constantly trying to be a good dad.

David Charvet is currently in a relationship with the fitness model, Oksana Rykova. The couple started dating in the summer of 2019.

Charvet was previously married to Brooke Burke. The couple exchanged wedding vows on 12 August 2011. From their marriage, they have two children. Burke gave birth to their daughter, Heaven Rain Charvet on 8 January 2007, and son, Shaya Charvet on March 5th, 2008.

After seven years of marriage, in April 2018, the couple announced that they were divorcing. The divorce was finalized in March 2020.

Who is David Charvet?

The French singer David Franck Charvet is an actor, model, and television personality. He is known as Matt Brody in the American television program Baywatch.

Similarly, his debut single is Should I Leave, it is a bilingual hit in French and English, hit #3 in France, and also charted in Belgium and Sweden.

He was born on 15th May 1972 in Lyon, France. He was born to parents Christiane Charvet Haddad (mother) and Paul Guez (father). His mother is French whereas his father is a Sephardic Jew.

Moreover, he is also a prominent businessman and the founder of the Sasson brand of jeans in the 1980s.

Likewise, his nationality is American-British and his ethnicity is Sephardi Jewish and French.

David Charvet got a big break in the year 1992 on the American television program Baywatch as Matt Brody. He played on Baywatch for three full seasons until the year 1995. After that, he appeared as Craig Field on Melrose Place from 1996–98. Similarly, between 1995–99, he appeared in Seduced and Betrayed, Derby, Angel Flight Down, and Meet Prince Charming.

But, he left acting in 1999 to concentrate on his musical career. In the year 2006, he returned to acting in a movie directed by Roger Christian called Prisoners of the Sun, which was only completed and released in 2013. After that, he also appeared in the film Green Flash, also known as Beach Kings.

In the year 2009, David Charvet took part in ABC’s summer reality show The Superstars and came in third with his partner Lisa Leslie. Similarly, in the year 2010, he was a contestant in the French reality show La Ferme Célébrités (French version of The Farm).

Moreover, after successful runs at Baywatch and Melrose Place in the 1990s, he decided to return to France with a 5-album contract with Universal MusicGroup France.

Likewise, his debut single “Should I Leave” was a bilingual hit in French and English. It was a hit #3 in France and also charted in Belgium and Sweden. Furthermore, his bilingual hit “Jusqu’au bout”/”Leap of Faith” reached #6 in France, followed by the bilingual “Apprendre à aimer”/”Teach Me How to Love” that made it to the French Top 20.

In 2009, he appeared as a contestant in ABC’s summer reality TV show, ‘The Superstars’, and finished as a second runner-up with his partner Lisa Leslie. The following year, he took part in the French reality show, La Ferme Célébrités broadcasted on TF1.

He was nominated for Best Male TV Star in Bravo Otto in the year 1993.

Charvet has an estimated net worth of around $30 million as of 2021. He has not revealed his annual salary but on average, an actor earns around $40k per year.

Charvet without a doubt earns much more than this but has not revealed his salary. He owns a $20 million mansion in Malibu.

There were rumors that he is dating Jermaine Jone’s wife, Sarah Jones. Similarly, he confirmed about dating her.

David Charvet stands at a height of 6 feet and weighs around 78 kg. He has maintained his physique with exercises and working out and looks fit for his age.

He has brown hair and a pair of blue eyes.

You may also like to read Lou Doillon, Richard Gere, and Nick Carter.

Brooke Burke is dating a mysterious person after her divorce with David Charvet 5 months back!