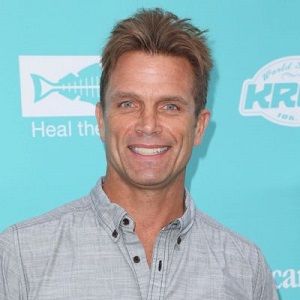 The 49-year-old American actor, David is a married man. He tied the knot with his girlfriend Susan Brubaker in 2004 after dating her for some time. Together, they also welcomed two daughters.

Although, they couldn’t carry their relationship for so long and broke up just after one year in 1998. Previously, he has also dated Karin Taylor. Currently, David and Susan are enjoying their married life and living elegantly.

Who is David Chokachi?

David Chokachi is an American actor. He rose to prominence after appearing in the 1995 famous TV series Baywatch as Cody Madison. Furthermore, he has also played in a couple of other hit series such as Witchblade and Beyond The Break. In addition, he has also appeared in some films which include Atlantic Rim, Rose Ville, and few more.

Davis was born on January 16, 1968, in Plymouth, Massachusetts, United States. He is the son of Iraqi father Modhaffer Khalaf Al-Chokhachy and Finnish mother Carolyn Coomb. He has two siblings, Robert Chokachi and Heather Chokachi. There is not any information regarding his childhood.

Moving towards his body measurements, David joined Tabor Academy, in Marion, Massachusetts. Later, he completed his graduation from Bates College in Lewiston, Maine with a degree in political science.

Davis began his acting career from the hit 1995 TV series Baywatch as Cody Madison. He began to play in the series along with Pamela Anderson and David Charvet. After four years, he left Baywatch and started appearing as the role of Jake McCartney in the TV series Witchblade.

Later in 2006, David landed the role of Justin Healy on The N’s TV series Beyond The Break. Furthermore, the famous actor has also featured in several TV series such as Suddenly Susan, Bad to the Bone, Beyond the Break, Soul Surfer, and a few more. In addition, he has also appeared in some films which include Atlantic Rim, Rose Ville, and a few more.

Being a famous actor, he earns a decent amount of money from his profession. Currently, he has a net worth of $3 million.

As of now, he has not won any awards in his career. However, he was named People magazine’s “50 Most Beautiful People in the World” in 1997.

So far, there are not any drastic rumor regarding his personal and professional life. Furthermore, he has never faced any controversy in his career to date. It seems he has total focus on his work rather than stuck in any controversy.

David has a height of 6 ft and his weight is unknown. Furthermore, he has a pair of blue eyes and light brown hair. Besides this, there is not any information regarding his other body measurements.