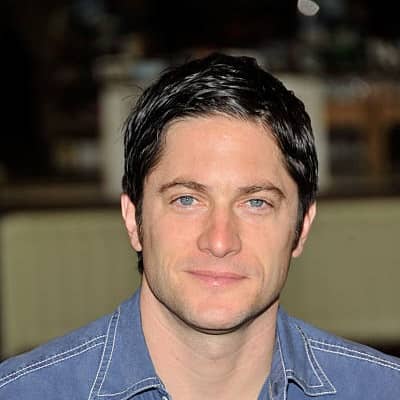 David Conrad’s marital status is unknown whether he has been married or not. He hasn’t introduced anyone as his wife or girlfriend as of now. So, he is possibly single.

In earlier, he has been in a relationship with an actress, Amanda Tosch. The couple met their mutual friend function in 2006. They dated for a year and later split up.

Similarly, Conrad dated Storm Large who is a singer, author, and actress for two months.

Furthermore, during his days on Ghost Whisperer, it was rumored that he was dating his co-star Jennifer Love Hewitt. However, the duo hadn’t spoken anything about the rumors.

Who is David Conrad?

David Conrad is an American renowned actor and theater artist. He rose to fame after appearing in the films like Men of Honor (2000), Anything Else (2003), Wedding Crashers (2005).

David is the youngest child of James Watson Conrad (Father) and Margaret Clement Conrad (Mother) who was born on August 17, 1967. He hails from Pittsburgh, Pennsylvania, U.S.

His father is an engineer, and Margaret Clement Conrad, a librarian. He is the great-grandson of an electrical engineer, Frank Conrad. He holds the nationality of Swissvale, Pennsylvania.

Similarly, he belongs to the Caucasian ethnicity. Conrad grew up on the border of Edgewood, both suburbs of Pittsburgh with his two elder brothers whose name is unknown.

Conrad attended the Swissvale High School and he later transferred to The Kiski School in the early 1980s on a scholarship. In 1985, he graduated from high school and joined Brown University major in history.

However, he had dropped out from Brown in 1990 and started working as a carpenter, a housepainter, a barista in Pittsburgh. From 1992 to 1996, he went on to study theatre at New York’s prestigious Juilliard School.

While at Juilliard, Conrad was a member of the Drama Division’s Group 25. He performed in the play of John Irving’s novel The Cider House Rules.

David made his onscreen debut in 1993 in a minor role as Vampire through the film, Darkness. In 1996, he won a lead role as Leo Roth on the television series, Relativity. That same year, he also starred in the film called Under Heat.

He also continued his stage career and made his Broadway debut in 1998 through Terence Rattigan’s The Deep Blue sea starring opposite Blythe Danner and Edward Herrmann.

Furthermore, he appeared in off-Broadway productions of Troilus and Cressida, Richard II, and Tom Stoppard’s Indian Ink. In 2000, he portrayed the recurring role of Daniel Pierce in the 5th episode of the fiction television series, Roswell.

As of now, he has not appeared in any film and television series. It seems that he takes a break from the entertainment industry. Also, he keeps a low profile so, the current details regarding him are unknown at the moment.

Until now, David has not been part of any sorts of rumors and disputes that create headlines in the media. Also, he stays miles away from such controversial acts that could hamper his personal and professional life.

As per other online sources, David has an estimated net worth of around $3 million throughout his career as a successful actor. Further, his yearly income and other assets are still under review.

The actor stands at the height of 6 feet 1 inch tall and his weight is around 75 kg. He has a fair complexion with an athletic body figure. He has dark brown hair color with hazel blue pair of eyes color.