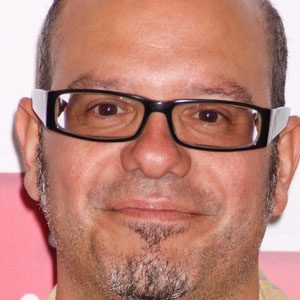 I don't think HBO would want to do anything in conjunction with Sub Pop but I never asked either.

It's not about trying to be funny all the time. It's more of a document that hopefully is funny.

I'm pretty happy. I obviously have complaints about things, but for the most part, I'm on the above-average side of happy people.

David Cross is a married person. He has been married to Amber Tamblyn since October 6, 2012. The couple began dating in 2007 and engaged in August 2011. He is 19 years older than Amber. The couple welcomed their daughter on February 21, 2017. He joked that he named his daughter Dauphinoise Petunia Brittany Scheherazade Von Fünkinstein Mustard Witch RBG Cross Tamblyn-Bey jr and in the same year, she was named as Marlow Alice Cross.

Who is David Cross?

David Cross is an American actor, director, stand-up comedian, director, and writer. He is best known for his stand-up performances in the HBO sketch comedy series ‘Mr. Show’ from 1995 to 1999. He is also well recognized for his role as Tobias Funke in the sitcom ‘Arrested Development’ from 2003 to 2019.

He was born on April 4, 1964, in Atlanta, Georgia, USA. he is currently 55 years old. His father’s name is Bary and his mother’s name is Susi Cross. His mother is American and his father is British. When he was only six months old, his family shifted to Florida, and then New York and Connecticut. Finally, the family settled back to Roswell, Georgia. He has for two younger sisters: Juli and Wendy Cross.

His family was poor and his father walked out when he was 10 years old. He revealed that he does not have any relationship with his father and has not talked with him since the age of 19. The family was evicted from their Georgia home and he had to live in motels and friend’s homes.

David holds American citizenship but his ethnicity is Ashkenazi Jewish.

He attended Northside High School and graduated from there and later attended Emerson Colege in Boston. But, he dropped out only after a semester.

He began his career at the age of 17. He began performing to perform stand-up comedy. After he moved to New York, he did odd jobs for some time and fulfilled his basic needs while also continuing his comedy work.

He along with other 12 performers formed a group in the early 199s and put on a new show every week. He was hired by Joe Frank in order to appear in radio programs ‘A Hearing Jam’ in 1999, ‘Unfictional’ and ‘The Last Run’.

He has an estimated net worth of around $12 million and he has earned that sum of money from his professional career.

David was sued by Nashville club owner Thomas Weber for accusing him of taping him without permission for ‘Shut Up You Fucking Baby’ and ‘Let America Laugh’ in October 2005.

Also, he revealed that he had taken cocaine at the 2009 White House Correspondent’s Dinner.

He has a height of 5 ft. 8 inches and weighs 75 kg. David has dark brown eyes and black hair.