Likewise, David dated Mandy Komlosy in 1992, but the relationship didn’t go well so they break up. He dated Sharon Stone in 1993, but they broke up.

Therefore, he started going out with her The X-Files co-star Dana Wheeler-Nicholson in 1995. But the relationship didn’t go well so they decided to break up. Then, he dated Winona Ryder in 1996, but they broke up.

Finally, David married an actress, Téa Leoni on May 13, 1997. The couple has two children: Madelaine West and Kyd Miller. The couple started living separately, allegedly due to Duchovny’s sex addiction. In 2014, they separated legally. 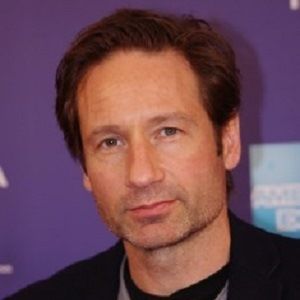 It is nice and natural with Gillian, It was nice to work with her again. I don't know why we have such good chemistry, it is really mystical. We have always worked really well together. It is always easy to work with her

People say the world changes all the time, and yet human nature remains the same. I think what's changed is the size of our cell phones.

Who is David Duchovny?

David was born in New York, the United States on August 7, 1960, to parents Amram Duchovny and Margaret Duchovny. He is 61 years old. His father was a school administrator and teacher.

Whereas, his mother was a writer and publicist. He has siblings namely, Daniel Duchovny and Laurie Duchovny. He belongs to American nationality and mix (Ashkenazi Jewish- Scottish) ethnicity. His birth sign is Leo.

On talking about his profession, David Duchovny appeared in an advertisement for Löwenbräu beer in 1987. In the next year, he also appeared in two scenes in Working Girl (1988).

Whereas, he had a recurring role as a transgender DEA agent on the series Twin Peaks and played the narrator and host in the long-running Showtime erotica/soft-core TV series Red Shoe Diaries.

In 1992, he also played the role of Rollie Totheroh, in the biographic film Chaplin, directed by Richard Attenborough and based on the life of Charlie Chaplin. In the same year 1992, he had a small role in the family film Beethoven.

According to X-Files creator Chris Carter, he turned out to be one of the best-read people he knew. After getting the role, he thought the show would not last for long or that it would not make as much impact as it did. Executive producer Frank Spotnitz called Duchovny “amazingly smart”.

Whereas, he provided the voice of Ethan Cole in the 2005 video game Area 51, as well as that of the title character “XIII” in the 2003 video game XIII. In 2003 he also starred in the 84th episode of the HBO show Sex and the City.

Whereas, the film starred Anton Yelchin, Robin Williams, and Duchovny’s wife Téa Leoni in a coming-of-age tale. Similarly, he also directed “Judas on a Pole”, an episode of Bones, during the show’s second season.

During  2015, he was announced as returning in a six-episode continuation of The X-Files. It premiered on January 24, 2016, on FOX.

David Duchovny: Salary and Net Worth

On talking about his salary and net worth, he earns $225,000 per episode. His net worth is around $80 million.

There was a rumor that he dated actress Ashley Judd in the early ’90s after meeting through mutual friends.

On talking about his body measurements, David Duchovny has a height of 6 feet. Additionally, he weighs is 86Kg. In addition, his chest, waist, and biceps sizes are 45-36-15 inches respectively.

David’s hair color is light brown and his eye color is blue.