David Eigenberg has been married to his wife Chrysti (Kotik) Eigenberg in 2002. Their relationship started back in the 90s. The Couplet has been blessed with a son, Louie Steven (born on January 19, 2009), and a daughter, Myrna Belle (born on January 31, 2014).

Currently, he is doing pretty well with Chrysti and there is no sign of any divorce or separation. 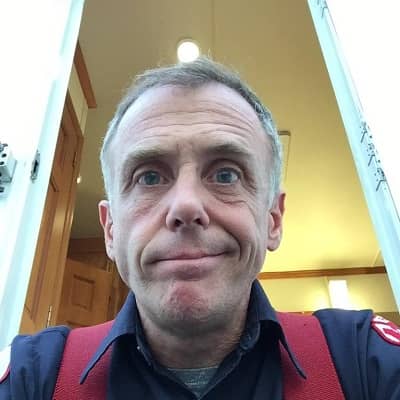 Who is David Eigenberg?

David Eigenberg is an American TV and film actor. He is best known as Steve Brady on the HBO series Sex and the City. Furthermore, he has appeared on several other tv shows, series, and films.

His Episcopalian mother, Beverly was the founder of pre-schools, and his Jewish father, Harry served as a public accountant. Likewise, he grew up in Naperville, Illinois with his 5 sisters. His older sister is Helen and the youngest one is Betsy.

He is of American nationality and belongs to mixed ethnicity (Episcopalian and Jewish). Before getting his graduation in 1982, he was enrolled at a local high school. After that, he enlisted in the United States Marine Corps Reserve and was discharged at the rank of Lance Corporal.

David Eigenberg has been talented since his childhood and started his career at the age of 25 in the movies and TV series.

His first acting role came in 1989 as Lawrence in a comedy film called Rude Awakening and was later seen in varieties of roles in several films such as Sam the Man, Washington Street, Five, and Let’s Do This! However, he was well known as Ernest Lehman in Liz & Dick in 2012.

Besides acting on films he has featured in many tv series and the most notables include Soldier of Fortune, Inc., Sex and the City, Chicago P.D., Chicago Fire, Chicago Med, Chicago Justice, and And Just Like That… among others.

Of all his illustrious acting career, he has earned a hefty amount and has a net worth of over $6M.

There are no rumors or controversies about this reputed personality. Currently, he is battling hearing loss.

Eigenberg has short black and pepper hair and blue eyes. He stands 5 feet and 7 inches tall and weighs around 75 kg.