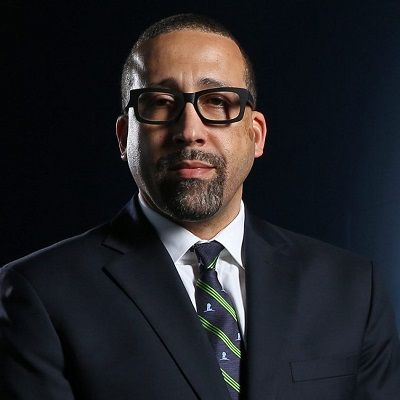 It doesn't matter what color you are. Poverty is poverty. Inmates come from all walks of life. We have to make sure we look out for these people and give them a chance

Herb Brown is like a basketball icon. What's the saying - he's forgotten more than I'll ever know.

David Fizdale is a married man.

He married Natasha Sen in the year 2004 at the luxurious Hotel Del Coronado in San Diego, California. Natasha is a founder of her personal brand The Creativity Penny.

Previously, David was engaged to Gabrielle Union. He has a son Kyle Jackson.

Who is David Fizdale?

David is the Head Coach since 2018 of the New York Knicks of the National Basketball Association.

David Fizdale was born on 16th June 1974 in Los Angeles, California. His mother is Helen Hamilton of Caucasian heritage.

His family members including his grandfather were the victims of armed violence.

David attended Fremont High School in Los Angeles, California and played as a point guard for the school’s basketball team.

After that, he attended the University of San Diego in San Diego, California where he graduated with a B.A. in Communications and Minor Sociology.

From the year 2003 to 2016, David was an assistant coach for the clubs like Golden State Warriors, Atlanta Hawks, and Miami Heat.

During his tenure with the Miami Heat, he coached Team Shaq. It was a squad selected by Shaquille O’Neal, at the 2013 Rising Stars Challenge during the NBA All-Star Weekend.

After the defeat, he was reshuffled and became an associate head coach after Ron Rothstein decided to retire.

Likewise, on 29th May 2016, he was named as the head coach of the Memphis Grizzlies. But was fired on 27th November 2017 after eight consecutive losses.

On 7th May 2018, he was named as the Head Coach of the New York Knicks. He signed a four-year deal with them.

In 2016, he signed a four-year contract with Grizzlies as Head Coach for $10.2 million US. He earned about $2 million US in his first two seasons and $3 million in his third year.