Yes, He is married to the beautiful American actress Bitsie Tulloch in June 2017. They are in a healthy relationship.

In 2019 they are blessed with a handsome son Vivian. 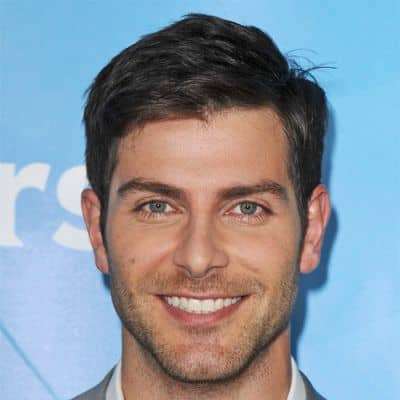 Who is  David Giuntoli?

David Giuntoli is an American actor, producer, and director. He has voiced to be character Bruce Wayne/ Batman in Batman: Soul of the Dragon(2021)

He has played the role of Eddie Saville in A million Little Things (2018- present). Along with that, he is famous for playing the role of Nick Burkhardt in Grimm.

David Giuntoli was born on June 18, 1980, in Milwaukee, Wisconsin, Us. His birth sign is Gemini according to the astrologist and he holds American nationality. he was born to his mother  Mary, of polish, and German descent, and his father David Giuntoli of Italian descent. He grew up in Huntleighand he is the single child of his parents.

In 1998 David Giuntoil graduated from  St. Louis University High School. After that, he joined  Indiana University Bloomington, with a bachelor’s degree in International Business and finance in 2002.

He came back to St. Louis after finishing college. Regardless, at first, he wants to take build his career in finance. Later on, he and his whole family realized he always made people laugh from a young age. Reconnecting with his high school theater teacher, he began taking acting lessons locally.

In 2003 he started his career as an actor, His first debut in the network’s reality series Road Rules for its South Pacific season. After three months again he appeared in another MTV reality show and a next appearance on the  7th season of Real World/Road Rules Challenge.

Moreover, in 2007 he moved to Los Angeles and joined the ‘Echo Theater Company to  Follow an acting career. In 2007 he appeared on Ghost Whisperer as Rick and Veronica Mars as Sneed Batmen Guy. In 2008 he played in more than Eight Tv series.

His biggest role is in the tv series Grimm(2011-2017) playing the role of Detective Nick Burkhardt which has almost six seasons and 123 episodes. In the same year, he played in another famous film 13 Hours: The secret soldiers of Benghazi as Scott Wickland and Buddymoon as David.

His recent film was Batman: Soul of the Dragon and presently he is starring in the ABC series  A Million Little Things.

Now, let’s talk about his net worth his net worth is approximately $3 Million. That includes his house, cars, money, and personal assets. Along with that, he lives in a lavish house.

He is not a controversial star he has not been involved in any kind of rumors and scandals. He doesn’t want to involve in such things which may ruin his clean image. Further,  there is no data and information about his bad side

David Giuntoli is a handsome and tall guy. His height stands at 5 feet 10 inches and his weight is 75kgs. Along with that, his body measurement is 32-26-32.

He has brown hair and a gray pair of eyes. Further, His body feature defined his personality.