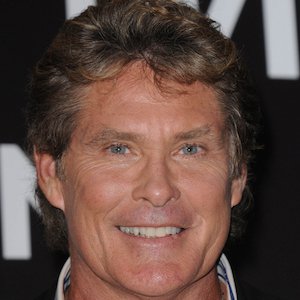 Celebrity means that I can affect people in a positive way

I think people know that I've got a good heart.

Reflecting on a personal life of David Hasselhoff, he is a married man. he is married to his longtime girlfriend, Hayley Roberts. The couple tied the knot on July 31, 2018. They engaged to her on May 2016. Hayley is a Welsh salesgirl. He is deeply in love with her, hence he was waiting for the right moment to propose her for which she said yes!

Prior, he has been married twice in his lifetime.

He was first married to Catherine Hickland on 24 March 1984 but they divorced on 1 March 1989. There isn’t any record of a child born from his first marriage. Then he married Pamela Bach-Hasselhoff on 8 December 1989 but his second marriage also couldn’t last for long. He got divorced from his second marriage on 27 July 2006. From this marriage, he has been blessed with two children, Taylor and Hayley.

Previously, he was also in a relationship with Linda Morris and Roberta Leighton. There isn’t any record of him being in other romantic relationship that we know of. Being a celebrity, his fans are curious to know more about him.

Who is David Hasselhoff?

Tall and handsome David Hasselhoff is an American actor, singer, producer, and businessman. He is best known as the television personality who set a Guinness World Record as the most watched man on TV. He is known for the series Knight Rider and Baywatch who later crossed over into a music career.

He was born on 17 July 1952, in Baltimore, Maryland. He has an American nationality and he has mixed ethnicity in  German, Irish and English.

He is the son of Joseph Vincent Hasselhoff(father) and Dolores Therese(mother). His birth name is David Michael Hasselhoff. His father was a business executive and his mother was a homemaker. His mother died on 11 February 2009.

Hasselhoff studied at Marist High School and graduated from Lyons Township High School in La Grange, Illinois in 1970. After graduating high school he attended the  Oakland University and graduating with a degree in theater at the California Institute of the Arts. He stands 1.94m tall.

David Hasselhoff is active in the entertainment field since 1973 and he is still active in it. He rose to fame in the 90s, with featuring parts in “Knight Rider” and “Baywatch”. Likewise, he propelled a modestly effective singing profession in Europe. He was a judge on “America’s Got Talent” from 2006-2009, and on “England’s Got Talent”.

He started his on-camera profession in the 70s, showing up on the soap, “The Young and the Restless”. He additionally worked on the show “Kids Incorporated”, and in the film “Starcrash”. In 1982, he was offered a role that would make him a star, as Michael Knight in “Knight Rider”.

Besides acting career, he is also a singer who has been successful in Europe but struggled in the United States.  He featured in, and produced the successful series, “Baywatch” in the 90s, and furthermore featured in the Broadway melodic, “Jekyll and Hyde”. He filled in as a guest judge on for the initial four seasons of “America’s Got Talent”, and additionally showing up in two “Knight Rider” TV films, “Knight Rider 2000” and “Knight Rider 2008”. Most recently, he repeated his part on “The Young and the Restless”, showed up in Season 11 of “Hitting the dance floor with the Stars”, and played out his music on a visit to Germany, Austria, and Switzerland.

David Hasselhoff: Salary and Net Worth

He has a net worth of $110 million but his salary is not revealed yet.

Talking about the rumor and controversy, he suffered controversy for trying to cut off his ex’s alimony.

David has the height of 6 feet 3 inches. He weighs 87kg. Besides these, he has brown hair and blue eyes. Furthermore, there are no details regarding his body measurements.