Updated On January 26, 2023 | Published By: Selina shamp | In controversy , Relationship , Sexuality
Share this 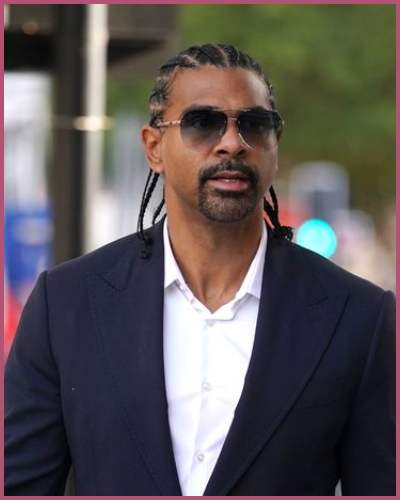 David Haye now breaks silence on the rumors for the first time in a month while attending the sold-out fight between Chris Eubank Jr and Liam Smith at Manchester AO Arena.

“I like to keep my private life, private. I let people in through my social media a little bit, but what I do behind closed doors is between me and the girls involved.”

As Daily Satr reported on January 5, 2023, Former heavyweight boxing champion David is in a three-way relationship with two other women. What’s the truth?

David Haye and his girlfriend Sian Osbourne had got the tongue wagging after the rumors start swirling about their ‘throuple’ with Una Healy.

Rumour mills hint that the former professional boxer, 42, and his girlfriend Sian are romantically involved with The Saturdays singer Una, 41. It was after the trio shared photos from their cozy trip to Marrakech, Morocco.

“Happy new year and may 2023 be everything you hoped for. If a picture says a thousand words, then this one says exactly what it needs to.”

David Haye was seen holding both the women’s hands in the photo from their holiday trip in Marrakech. Meanwhile, Una also posted a snap of the trio dining together while she captioned,

“I’ve started 2023 in a comfortable place, feeling genuinely happy and at peace. Here’s to this year being ours x. “

All three of them were silent while some sources claimed that the couple met Una on the celebrity dating app Raya. While fans were speculating about Haye’s comment on the holiday pictures of Una which read,

“So yeah, I don’t really want to go into all that.”

Meanwhile, David and Sian then in the 3rd week of January were seen enjoying time with a mystery woman. In the video that circulated online, David’s feet appeared to be touching the toes of two women while on a boat during the sunny getaway.

It’s just controversial how David and Sian are always raising the public’s eyebrows about their sexuality and polyamorous relationship.