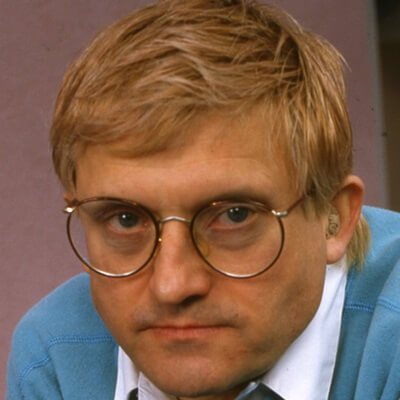 Well you can't teach the poetry, but you can teach the craft

The moment you cheat for the sake of beauty, you know you're an artist

We live in an age where the artist is forgotten. He is a researcher. I see myself that way.

David Hockney is in a romantic relationship with Peter Schlesinger, who was an art student. He is gay. The couple has not said anything about their plans for getting married as of now.

The two met at the University of California, where Hockney was a teacher. Furthermore, he has also expressed his love for man through his paintings as well. In one of his paintings, he painted two men together in the painting ‘Domestic Scene’ in which one man was showering while the other washes his back.

There is no information about his previous relationships.

Who is David Hockney?

David Hockney is a multi-talented British artist. He is famous as a painter, draftsman, printmaker, stage designer, and photographer.

He is also considered one of the most influential British artists of the 20th century for his important contribution to the pop art movement of the 1960s. People also know him as a playboy in the art world.

David Hockney was born on 9 July 1937, in  Bradford, West Riding of Yorkshire, England, to parents, Laura and Kenneth Hockney. His current age is 82. He has four siblings named Paul Hockney, Margaret Hockney, John Hockney, and Philip Hockney. David was the youngest one. David’s father was a conscientious objector in the Second World War.

His ethnicity is English. His sexual orientation is Gay.

David Hockney started his career as a printmaker. In 1954, he worked in etchings during his time at RCA. The following year, he was hired at the print workshop called Gemini G.E.L.

He then made ‘The Hollywood Collection’ which was a series of lithographs recreating the art collection of a Hollywood star. Likewise, he started producing several other portfolios such as ‘The Weather Series’, ‘Some New Prints’, and ‘Friends’. He created other many series of prints to which he considered as ‘graphic tales’ which included ‘A Rake’s Progress’, ‘Illustrations for Six Fairy Tales from the Brothers Grimm’, and ‘Illustrations for Fourteen Poems from C.P. Cavafy’.

In 1968, he started painting portraits and double portraits of friends, lovers, and relatives. He continued painting for a few years. He created over 200 drawings of friends, family. In 1976, Hockney made a portfolio of 20 etchings at Crommelynck’s atelier called ‘The Blue Guitar’. His other famous print portfolios are ‘Recent Etchings(1998)’, ‘Home Made Prints(1986)’, ‘Moving Focus(1984)’, and so on.

He also worked in theatre designs. In 1980, he started designing sets and costumes for the 20th-century French triple bill at the Metropolitan Opera House. The following year, he designed sets for another triple bill of ‘Le Sacre du Printemps’, ‘Oedipus Rex’, and ‘Le Rossignol’. He has designed sets for many other occasions as well.

In 2017, on the occasion of the revival and restoration of his production for ‘Turandot’, he was awarded the ‘San Franciso Opera‘ medal. Moreover, he also has been featured in over 5oo group exhibitions and over 400 solo exhibitions.

David Hockney is one of the richest painters in the world with a net worth of $40 million. He also owns an office in Santa Monica Boulevard in West Hollywood.

In November 2015, he sold his house in Bridlington for £625,000. In 2018, Hockney made a world record of being the wold’s most expensive living artist by selling one of his paintings for a final price of $90 million. His other 1990 landscape ‘Pacific Coast Highway and Santa Monica’ was sold at the final price of $28.5 million.

Hockney uses cannabis for medical purposes and he holds California Medical Marijuana Verification Card. He has been using hearing aids since 1979. His regular routine includes half an hour in the swimming pool each morning and standing for six hours at the easel. Furthermore, he also has synaesthetic associations between sound, color, and shape.

There are no rumors or controversies concerning David as he has kept his profile clean.

He has blonde hair with brown eyes. His other physical measurements such as his height and weight are unknown.

You may also like to know more about the Bio, Age, Professional Career, Net Worth, Relationship of Natalie Dreyfuss, Alessandro Nivola, Bryden Lando, and Asa Soltan Rahmati