Updated On January 29, 2023 | Published By: Aryan Kapri
Share this
Single 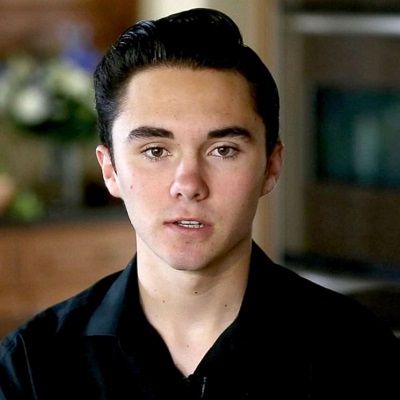 I am not a crisis actor, I'm somebody who had to witness this and live through this and I continue to have to do this

This isn’t left or right, it’s about saving lives, through unity and love we will win and end gun violence.

What is the relationship of David Hogg?

David Hogg’s relationship status is possibly single. He has not revealed his girlfriend’ss name.

Who is David Hogg?

He is one of 20 founding members of Never Again MSD, a gun control advocacy group led by Marjory Stoneman Douglas High School students. In conjunction with his gun control advocacy, he has helped several high-profile protests, marches, and boycotts.

On June 19, 2018, David along with his sister Lauren Hogg, published a book titled NeverAgain: A New Generation Draws the Line. The book made the New York Times bestseller list.

Currently, David is a student at Harvard University.

David was born David Miles Hogg on the 12th of April 2000 in Los Angeles, California, United States. He is 22 years old.

He is the son of Kevin Hogg (father), a former agent of the Federal Bureau of Investigation, and Rebecca Boldrick (mother), a teacher for Broward County Public Schools in Broward County, Florida.

In addition, he has a sister Lauren Hogg. He belongs to the Scottish-English heritage. Moreover, his Zodiac sign is Aries.

Hogg chose to attend Stoneman Douglas because it offered television production classes. He graduated on June 3, 2018.

Hogg was accepted to several universities including the University of California, Irvine. Surprisingly, he decided to take a year off before starting college to work on the 2018 mid-term elections.

In December 2018, Hogg announced that he was accepted by Harvard University. Therefore, he planned to start his courses in the fall of 2019.

After the school shooting, Hogg emerged as a leader in the 2018 United States gun violence protests.

Along with Alfonso Calderon, Sarah Chadwick, Emma Gonzalez, Cameron Kasky, and other students, he turned to the media to talk about their role as survivors in the shooting and voice his opinion on gun control and gun violence.

Hogg flew to Los Angeles on February 21, 2018, to be on The Dr. Phil Show, along with his sister, to discuss the school shooting. There, they met with survivors of the Columbine High School massacre that occurred on April 20, 1999, in Columbine, Colorado, United States.

His net worth and salary are not disclosed.

Is David Hogg involved in any rumors and controversies?

Shortly after the shooting, false claims appeared on social media that it had never really happened. David along with his friends was accused of being a “crisis actor”.

According to David’s mother, Hogg’s family received death threats from various conspiracy theorists. The conspiracy theories about Hogg and other Parkland activists were named PolitiFact’s 2018 Lie of the Year.

On the morning of June 5, 2018, Broward County Sheriff’s Office received a false report from an anonymous caller claiming that there was a hostage situation in Hogg’s family home.

During June 2019, while an interview with the Washington Post Magazine, Hogg said there have been seven assassination attempts on his life.

David Hogg has brown hair with dark brown eyes. His height is 5 ft and 10 inches and has a decent body mass.

You may also like to read about Alexandra Paul, Rory John Gates, Anne Thompson.