David LaChapelle is an American photographer and director. He is famous for his style that suggests uniqueness, sexuality, surrealism, and humor. He is currently single.

David LaChapella currently seems to be single. However, he has been in relationships in the past most notably, a marriage with a woman and relationships with two men.

While living in London, he met the British singer-songwriter, Peter Robinsion a.k.a. Marilyn. The couple got married there. However, the marriage lasted for just a year.

In the mid-1980s, David tragically lost his then boyfriend to AIDS. Moreover, he was also in a relationship with his agent, Fred Torres. 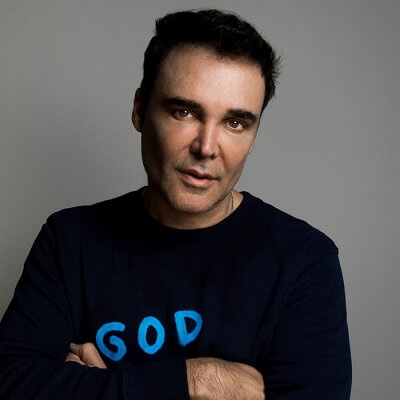 Who is David LaChapelle?

David LaChapelle is an American photographer and director. He is famous for his style that suggests uniqueness, sexuality, surrealism, and humor.

David LaChapelle was born in Hartford, Connecticut on March 11, 1963. As of 2020, his age is 57. He was born to parents Philip LaChapelle (father) and Helga LaChapelle (mother). He is one of their three children and also has a sister named Sonja and a brother named Philip.

At the age of 15, he ran away from home and became a busboy at Studio 54. His ethnicity is Caucasian.

Talking about his educational background, he studied at the North Carolina School of Arts. After that, he also went to New York’s  School of Visual Arts.

After meeting Andy Warhol, he offered him a job at Interview magazine. His work was very impressive and he then got the opportunity to work for several other top magazines, like Vogue, Photo, GQ, Vanity Fair, and Rolling Stone.

In 2007, David LaChapelle displayed a collection of photographs titled ‘Awakened’. There were many pictures with some showing people as corpses by suspending them on the water while the other showed cathedrals and museums being flooded with water. However, there was one which caught much attention, it was a modern version of Michelangelo’s ‘The Flooding’. It has a background of ‘Ceaser’s Palace’ with the Las Vegas theme and Gucci and Burger King’s destroyed banners among many things.

LaChapelle also has had a successful career as a director. In 2004, he directed The Red Piano show of Elton John at the Caesars Palace in Las Vegas with an all-embracing use of LED screens with visual technologies. Moreover, he has also directed many advertisements for various brands like Burger King, Diesel, Nokia, Lavazza, L’Oréal, and Tommy Hilfiger. Furthermore, he also directed the first season of the TV show, ‘Desperate Housewives’.

LaChapelle stands at a height of 6 feet 1 inch. His hair color is brown and similarly, his eyes are also brown in color.

David LaChapelle has an estimated net worth of around $5 million as of 2020. Although there is no information about his exact salary, top photographers in America earn over $75k per year.

David famously photographed the advertisement of sailors kissing for Diesel in 1995. This ad created many controversies in America. The controversy was mainly because it was a time when the ‘Don’t ask, Don’t tell’ debates were high in the US leading the government to bar gays, lesbians, and bisexuals from entering the military service. However, in 2011, Barack Obama removed the law.

You may also like to read the Bio, Career, Net Worth, Body Measurements, Relationships, and more about Uma Thurman, Cameron Diaz, Leonardo DiCaprio, etc.