People mostly know him for his appearances in movies and television series including ‘Michael Clayton’, ‘Scent of a Woman’, and ‘Law & Order.’

David Lansbury was previously married to Ally Sheedy. The pair were together from 10 October 1992 to 9 June 2009. They have a child together named Beckett Lansbury who was born on March 15, 1994.

Currently, David is married to Kristina Mikkelsen. The couple married on 6 June 2013. They have a son together Emmet Auden Claus, who was born on July 31, 2013. 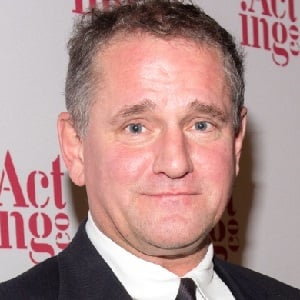 Who is David Lansbury?

David Lansbury is an American actor. People mostly know him for his appearances in movies and television series including ‘Michael Clayton’, ‘Scent of a Woman’, and ‘Law & Order.’

Lansbury was born in New York City, New York on February 25, 1961. He was born to parents Edgar Lansbury and Rose Lansbury.

Additionally, he has an older brother named James Lansbury. David became intrigued by the world of acting from an early age. He is of American nationality.

Talking about his education, no information is available about Lansbury’s educational background.

David Lansbury initially appeared in a minor role in the TV series ‘The Play on One in 1988. In addition, in the same year, he also appeared in ‘Gorillas in the Mist’ and ‘The Equalizer.’

He played the role of Randall in the TV series ‘Swamp Thing’ in 1992. He also appeared in ‘Gas, Food Lodging’ and ‘Scent of a Woman.’

Since then, he has appeared in several other movies and television series. All in all, he has over 25 credits as an actor.

Some other movies and television series that Lansbury has appeared in include ‘Valley Inn’, ‘Broadway’s Finest’, ‘Law & Order’, ‘Fringe’, ‘Michael Clayton’, ‘Law & Order: Special Victims Unit’, ‘From Other Worlds’, ‘Sex and the City’, ‘Cupid & Cate’, ‘A Stranger in the Kingdom’, ‘The Hurricane’, ‘Macbeth in Manhattan’, ‘Promised Land’, ‘Swift Justice’, ‘Truman’, ‘Parallel Lives’, ‘Crime & Punishment’, and ‘Murder, She Wrote’ among others.

Lansbury garnered the OFTA Television Award nomination in 1999 for his performance in ‘Oz.’

He received the nomination in the category of Best Guest Actor in a Cable Series.

Lansbury has not revealed his current salary. Furthermore, there are no details available about his estimated net worth at present.

Lansbury has not been involved in any notable controversies in his career. Furthermore, at present, there are no rumors concerning his life and career.

Talking about his body measurement, David Lansbury has a height of 6 feet (1.83 m) and a decent weight.

Additionally, his hair color is dark brown/grey and his eye color is blue.