Updated On January 29, 2023 | Published By: Brandy Stratton
Share this
In Relation 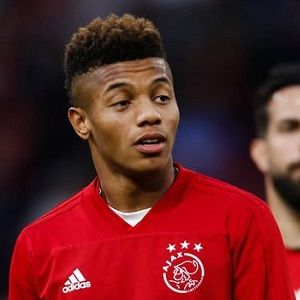 What is the relationship of David Neres?

David Neres is not a married man. There is no information about his previous love life but he is dating Kira Winona at present.

She is a German model and their love life started after Neres sent her private messages on Instagram.

His girlfriend is a fitness instructor and a model who commutes between London and Amsterdam. He revealed that he saw her on Instagram and sent her a direct message. Since then the couple is together.

Who is David Neres?

David Neres is a 22 years old Brazillian professional football player. He plays for the Dutch club Ajax as a forward.

He was born on 3rd March 1997 in Sao Paulo, Brazil. His mother worked as a cleaner and his father used to paint the chandeliers.

Similarly, he has a brother Vinicius and two sisters, Kim and Ingrid. His nationality is Brazilian and has the ethnicity of Afro-American.

Likewise, he was raised in his hometown in Perus, Sao Paulo. He was very fond of playing since childhood and in 2007 when he was 10 years old joined the Sao Paulo’s youth setup.

Talking about his education, he was educated at private schools courtesy of grants which awarded him for his outstanding academic performances.

His father guided him to build a career in football so he enrolled at the youth systems of Sao Paulo FC.

In the year 2016, he suffered from a shoulder injury when he was in U-20 Copa Libertadores. Similarly, he was promoted to the main squad in 2016 and made his debut on 17th October. He was a second-half substitute for Robson.

Likewise, on 22nd October 2016, he scored his first goal. It was a 2-0 home win against Ponte Preta. After 14 days he scored the second goal and netted the second in a 4-0 home routing of local rival Corinthians. In year 2017, he moved to the Dutch club Ajax for €12 million.

Now talking about his international career, on 8th Match 2019, he received his first senior team call-up by coach Tite.

It was for the Brazil National Football team as he replaced an injured player Vinicius Junior, for the friendlies against Panama and the Czech Republic to be held later that month.

Again on 26th March 2019, he made his senior debut against the Czech Republic. It was in a 63rd minute as a replacement for Richardson.

Similarly, he made an assist and produced a backheel which led to a goal. He contributed two goals in the 3-1 win against the Czech Republic.

The footballer David has not won any awards and nominations yet.

David Neres might earn a huge amount of money from his football career. However, he has not revealed his salary, and his net worth is estimated to be around $7 million as of 2022.

His value is now at €50m. He is the owner of two luxury cars and one of them is Nissan.

He has not been a part of any rumors and controversy yet. As he is busy focusing on his career.

Talking about his body measurements, he has a height of 5 feet 9 inches and weighs around 74 kg.

His hair color is black whereas he has brown color eyes. Other body measurements of Neres is not available.