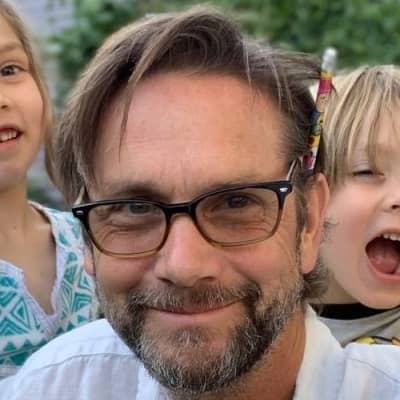 Reflecting on his love life, David Newsom is straight and a married man. He is married to a popular American actress, writer, and director Sian Heder.

Together with Sian, they are blessed with two children. Currently, they are happy together and there is no sign of separation between them. He is living a lavish life along with his wife and children in Los Angeles.

Who is David Newsom?

David Newsom is an American actor, Movie Producer, and fine-art photographer. He is well known for his work in the famous ‘Open Your Eyes’ and ‘Mother’. He has worked with personalities like Viggo Mortensen and Perceval Press.

In addition, Nesom has appeared in various television guest roles and TV Shows.

He is originally from New Jersey and grew up in his hometown. Later, he moved to New York in order to attend the University.

His family background is not much disclosed yet. However, his father was an investor and his mother was an employment agency manager.

Likewise, he holds American Citizenship and his zodiac sign is Pisces.

Regarding his education, Newsom attended Ithaca College situated in New York and gained a degree in film production.

All about David Newsom’s Career

Jordan is mainly a movie actor and producer. Likewise, he made his professional film debut in the year 1994 with the movie ‘Wes Craven’s New Nightmare’. The movie was popular among millions of fans. David appeared in an American dark-comedy film ‘Black Circle Boys’ and  ‘A one Time Thing’ as Coach Earhorn and Dillon respectively.

In 2005, Newsom produced his first short film ‘Mother‘ which was written and directed by his wife, Sian Heder. In April 2006, “Mother” won the Grand Jury Award for Best Narrative Short at the Florida Film Festival. His first produced movie became a huge hit and eventually won third place in a field of 18 films from around the globe.

In 2006, he even co-starred as Brian Sullivan, in the American Television series ‘Without a Trace’. Newsom also produced Open Your Eyes 2007 along with the film director and writer, Susan Cohen. In May 2008, his film “Open Your Eyes” won the award AFI “Jean Picker Firstenburg Award of Excellence”.

Furthermore, he has appeared in various popular movies.The list of some of his appearances in TV series and movies includes Kiss Kiss Bang Bang, CSI: Miami, CSI: Crime Scene Investigation, Melrose Place, The Mentalist, and Orange Is the New Black.

In addition, he was a field producer, cameraman, and story producer for Discovery’s “DEADLIEST CATCH”, Season 7, and Nat Geo’s “Wild Justice”, seasons 2 and 3.

David is one of the famous movie producers to gain huge fame and wealth through movies. He has an estimated net worth of around $20M.

Being a movie producer, he has earned a decent amount of money. Likewise, he is living a lavish life along with his wife and children in Los Angeles. He has his own car and has a house in Los Angeles.

Jordan has been successful in keeping herself far from rumors and scandals in her personal and professional life.

David has a decent height of  6 feet 2 inches. He is around 70 kilograms. Similarly, he has naturally brown hair and charming amber eyes.  Moreover, his distinctive feature is his good personality and charming face. As per allfamoustrend, his dress size is 14 (US), and wears a shoe size of 6 (US).