David Otunga is an American lawyer, actor and retired professional wrestler. He is currently single.

Previously, he was in a long-term relationship with the famous singer and actress Jennifer Hudson. Seven months after meeting Jennifer, he proposed her on Hudson’s 27th birthday and got engaged later that year. On August 10, 2009, Hudson gave birth to the couple’s first child, a boy named David Daniel Otunga Jr.

The couple split after being together for a decade. The reason for their split is said to be because of domestic violence. His ex-fiance also sent him protective orders. 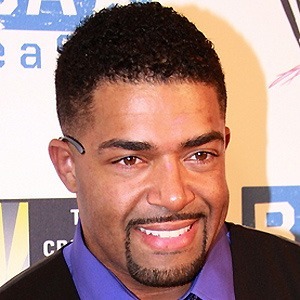 I'm always trying to push the envelope and go with a different hairstyle that you're not going to see on anybody else. I have a really good grade of hair, and I can do a lot of different things with it

When I look someone in the eye, they are immediately smitten with me.

Who is David Otunga?

David Otunga is an American lawyer, actor and retired professional wrestler. He is currently signed with WWE as a color commentator on the Raw brand. He is a two-time WWE Tag Team Champion in a partnership each with Michael McGillicutty and John Cena. Otunga is also an original member of The Nexus and The New Nexus along with Heath Slater.

David Otunga was born on 7 April 1980, in Elgin, Illinois, USA. His birth name is David Daniel Otunga. He is the son of Billie Otunga and Moses Otunga. He is the youngest of three children. His nationality is American and he is of African-American ethnicity.

Otunga graduated from Larkin High School in 1998.  After that, he earned a bachelor’s degree in psychology from the University of Illinois. He later graduated from Harvard Law School. Following his graduation, he joined American law firm, Sidley Austin.

David began his career as a laboratory manager in Columbia University’s Cognitive Neuroscience Center. After that, he joined Sidley Austin as a lawyer. He worked with Sidley Austin from May 2005 to October 2007. He starred in the 2013 thriller film The Call.

Otunga made a guest appearance as himself in few episodes of General Hospital. In November 2008, Otunga signed a developmental contract with World Wrestling Entertainment. He made his debut on May 29, 2009, under the ring name Dawson Alexander in a six-man tag team match. He is a two-time WWE Tag Team Champion. Otunga is now retired from in-ring competition.

Otunga returned to television on February 2, 2015, doing the Raw Pre-Show. He currently works with WWE as a color commentator on the Raw brand. His salary is unknown and he has a net worth of 10 million dollars as of 2022.

Currently, there are no desperate rumors regarding his personal and professional life. It seems he is doing best job without harming others and has been a straight person in his life, for which he has not been in any serious controversy yet.

David has a height of 6 feet and weighs 103.9 kg. His hair color is black and eye color is dark brown. His shoe size is unknown.

No treadmill, no exercise, yet this actress lost 80 lb weight; Know the secret of Jennifer Hudson on how to lose weight naturally, who is she married to, her career