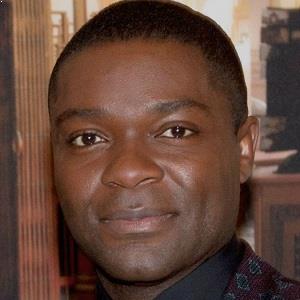 It's fascinating to work with a company of actors of such different ages, experience and talents. I'm one of a generation brought up on television whose acting is more naturalistic, whereas with some of the older generation it's more heightened. But I think there's room for both styles.

I think it's vital to have something outside your acting to keep you rooted in the real world, and help you fill the vacuum. If you have nothing else, it can be unhealthy. For me, being a Christian has been invaluable: it simply means acting isn't the centre of my life.

What is the relationship of David Oyelowo?

David Oyelowo is a married man. He and his wife Jessica Oyelowo have four children together from the marriage Caleb Oyelowo, Asher Oyelowo and other. Jessica is also an actress.

Currently, they reside in  Los Angeles, California. The marriage is going strong as no news regarding any extramarital affairs is known between the pair.

Who is David Oyelowo?

David Oyelowo is a British-Nigerian actor and producer. He portrayed the role of Martin Luther King Jr. in the American biographical drama film ‘Selma’. Additionally, on television, he played MI5 officer Danny Hunter on the British drama series ‘Spooks’.

Oyelowo was born in Oxford, the United Kingdom on April 1, 1976. Throughout most of his childhood years, he grew up in Tooting Bec. Later, when he was six, his family moved to Lagos. He became interested in the world of the show business since his early life. He is of British-Nigerian nationality. Furthermore, he belongs to the Nigerian ethnic background.

Talking about his education, Oyelowo studied theatre studies at City and Islington College. Later, he finished his three-year training in 1998 at the London Academy of Music and Dramatic Art. Additionally, he also spent time with the National Youth Theatre.

Oyelowo initially began his stage career in 1999 when he was offered a season with the Royal Shakespeare Company playing roles in Ben Jonson’s ‘Volpone’. Additionally, he was the first black actor to play an English king in a major production of Shakespeare.

Talking about his television work, Oyelowo played the role of MI5 officer Danny Hunter on the British drama series ‘Spooks’.  In 2006, he appeared in the television film ‘Born Equal’. Furthermore, in December 2009, he played the leading role of Gilbert in the BBC TV adaptation of Andrea Levy’s novel ‘Small Island’.

Additionally, in 2014, he formed his own independent production company, Yoruba Saxon Productions. He has been part of other movies and television series including  ‘The Lion Guard’, ‘Star Wars: Rebels’, ‘A United Kingdom’, ‘Nina’, ‘A Most Violent Year’, ‘Lee Daniels’ The Butler’, ‘96 Minutes’, ‘Rage’, ‘Who Do You Love’ and more.

Oyelowo has not revealed his current salary. However, he has an estimated net worth of around $6 million as of 2022.

Oyelowo became part of the “Oscars So White” controversy. He called for a “radical and timely change” within the Academy Awards to tackle the lack of diversity among nominees. At present, there are no rumors concerning David and his career.

Talking about his body measurement, Oyelowo has a height of 5 feet 9 inches (1.75 m). Additionally, he weighs around 78 kg or 172 lbs. Furthermore, his hair color and eye color is black.

Oyelowo is not quite active on social media. He does not have his official account on social media sites including Twitter. However, his fan page on Facebook has more than 130k followers and he has over 152k followers on Instagram.