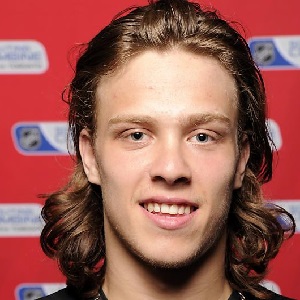 What is the relationship of David Pastrnak?

David Pastrnak is possibly single at the present time. Even if he is in a relationship, there is no information about his affair.

Talking about his previous relationship, he dated Adela Zahrajova. She is a model from Havirov in the Czech Republic. They had a long distance affair and both were not able to give time to their relationship. This was the main reason for their breakup.

Who is David Pastrnak?

David Pastrnak is a Czech professional ice hockey player. He currently plays as a right winger currently playing for the Boston Bruins of the National Hockey League (NHL). Pastrnak was selected by the Bruins in the first round, 25th overall, of the 2014 NHL Entry Draft.

David was born on 25 May 1996, in Havířov, Czech Republic. He is the only son of Milan Pastrňák and Marcela Pastrňáková. His father wanted him to play ice hockey since he was a child. His father died due to cancer.

He considers his father as the reason he began practicing and training so hard to make it as a hockey player for his father. He later started training with the Boston Bruins. He has a brother, Jakub Pastrňák.

His educational background has not been disclosed yet. He usually doesn’t talk about his private life in media and public. His nationality is Czech and he is of Czech ethnicity.

David began playing ice hockey as a trainee with the Boston Bruins. He attended Bruins training camp for the 2014–15 season. On 15 July 2014, Bruins signed him to a three-year entry-level contract. He was later assigned to the Providence Bruins, the team’s American Hockey League (AHL) affiliate on October 7, 2014.

He later made his NHL debut with the Bruins on 24 November 2014, in a 3–2 overtime loss to the Pittsburgh Penguins. David scored the first two goals of his NHL career against Ray Emery on 10 January 2015. During a Bruins home game of the 2015–16 regular season, against the Pittsburgh Penguins on 24 February 2016, Pastrnak became the youngest Bruins player ever to score a penalty shot goal only four minutes into the game.

On October 28, 2016, Pastrnak has suspended for two games for an illegal check to the head of New York Rangers defenseman Daniel Girardi. He has an annual salary of $832,500. His net worth is unknown.

He has a height of 6 feet with body weight 85 kg. He has light brown hair color and his eye color is brown.