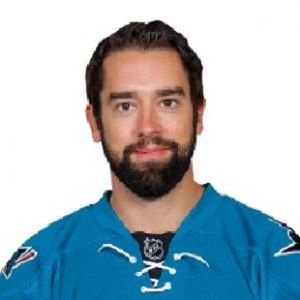 What is the relationship of David Schlemko?

David Schlemko has succeeded in keeping his personal life private and out of the spotlight. However, it is revealed that he is a married man. He is married to his longtime girlfriend Kristen Schlemko. There is no any information about their dating history and marriage date. He is still together with his wife and there is no sign of separation at all.

David Schlemko is a Canadian professional ice hockey player. He currently plays as a Defenceman for the San Jose Sharks of the National Hockey League (NHL).

David was born on May 7, 1987, in Edmonton, Alberta, Canada. His nationality is Canadian and he belongs to a North American ethnicity.

His father’s name is Greg and her works in Nisku in the fabrication section. His mother’s name is Kerry and she works for the Alberta government as an HR(Human Resource).

He was interested in playing hockey since his childhood days so he was sure about his ambition.

He began his professional ice hockey career as a senior player in the year 2007. He was signed as a free agent on July 19, 2007, by the Coyotes to a three-year entry-level contract. Shortly, he was traded to the Central Hockey League’s Arizona Sundogs. In 2008, he was assigned to the San Antonio Rampage. He played for the Phoenix Coyotes in the 2008–09 season of the NHL. He made his NHL debut with the Coyotes during the 2008–09 season.

David scored his first NHL goal on November 14, 2009, against Marty Turco of the Dallas Stars. During the 2012–13 NHL lockout, he played 14 games on the Arizona Sundogs of the Central Hockey League (CHL). On September 10, 2015, David signed a one-year contract for free with the New Jersey Devils. In July 2016, he signed a four-year contract as a free agent with the San Jose Sharks.

David Schlemko: Salary and Net Worth

He has an annual salary of 2.25 million. He is one of the highest-earning players in the club. His net worth is expected to be very high, but unfortunately, his net worth has not been disclosed to the media yet.

Moving towards his body measurements, he has a good height of 6 feet 5 inches (1.96m) and 89 kg. He has black hair color and his eye color is brown. There is no information about his body weight and shoe size.