David Spade is an American actor and a stand-up comedian.

He dated Nicky Whelan from 2007-2008. He had a brief relationship with Heather Locklear in 2006. Heather is an American Actress.

He dated Jillian Barberie and Sarah Foster in 2004. He dated Brittany Daniel his co-star for ‘Joe Dirt’ for some time. He dated Julie Bowen from 2003-2003. He had a brief relationship with Caprice Bourret in the early 2000s.

He dated Krista Allen from 2001-2002. She is an American actress from ‘Days of our Lives’. He also had a relationship with Stacey Hayes (2000-2001), who is an English spokesperson and a comedian.

Rumors were that he and Naya Rivera are having an affair in April 2017. 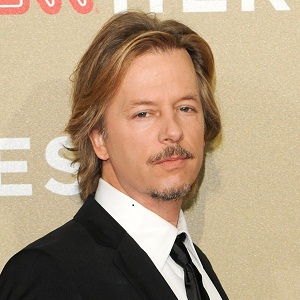 I got into stand-up to get on a sitcom

In grade school I was smart, but I didn't have any friends. In high school, I quit being smart and started having friends

You can either look at things in a brutal, truthful way that's depressing, or you can screw around and have fun.

Who is David Spade?

David was born on 22 July 1964, in Birmingham, Michigan. His nationality is American and his ethnicity is mixed(German, Irish, Scottish, English, Dutch, Swiss).

He was the youngest of the three children of Judith J. Meek (mother) and Wayne M. Spade(father). His mother was a writer and his father worked as a sales rep.

Having been brought up in Scottsdale (moved at age 4) and Casa Grande for most of his childhood, David had a rough childhood. His parents had a divorce so he along with his brothers was raised by his mother in relative poverty.

He was enrolled at Saguaro High School and Scottsdale Community College before moving to Arizona State University. He got his Bachelor’s degree in Business from the same University in 1986.

He used to perform stand-up at the University’s sketch comedy show ‘Farce Side Comedy Hour. He later did stand up in the mid-80s for the Monday Night Comedy Show at ‘Greasy Tony’s Pizza’.

Spade joined the ‘Saturday Night Live’ in 1998 with the help of his friend Dennis Miller. Due to his comedic skills and determination in the field, Spade became a regular cast member and also a writer for the show by 1990. During his time in the show, he became popular for his sarcasm and his sketches became popular among the long-time viewers of the show.

Some of his most popular sketches include ‘Flight Attendant’, ‘Total Bastard Airlines’ and others. His impressions of celebrities including Brad Pitt and Michael J. Fox were loved by many. He left the show in 1996 officially and later appeared to host the show in 1998 and 2005.

David Spade’s career in film was a successful one. ‘Tommy Boy, and ‘Black Sheep’ were among his early movies. His later films include ‘Dickie Roberts: Former Child Star’ ‘Grown Ups, and  ‘Grown Ups 2′.

He has also hosted numerous shows during his career including ‘Teens Choice Awards’ and ‘Video Game Awards’. He also produced a TV series ‘Sammy’ in 2000. Other projects that David is involved in includes ‘8 Simple Rules, ‘The Showbiz Show with David Spade’, ‘The Legend of Spyro: A New Beginning’, ‘Rules of Engagement, and ‘Joe Dirt’.

This actor plus comedian from his career has earned lots of fame and fortune. He is living a lavish life with a net worth of $60 million as of 2022. However, his other incomes and salary are not disclosed.

David was involved in a little bit of a controversy when he refused to go to Chris Farley’s funeral and a rumor began to assemble that they might have had a falling out between them but, he later told that he couldn’t attend the funeral because he couldn’t handle his friend’s loss emotionally.

David Spade has a good height of  5 feet 7 inches with a body weight of 78 kg. His hair color is blonde and his eye color is blue.

Are David Spade and Naya Rivera on the relationship? Continue reading to know more!!!