David Visentin a Canadian actor, real estate agent, and television host. He has appeared on different TV shows including Fox News Channel. David is married and has a son with his wife. 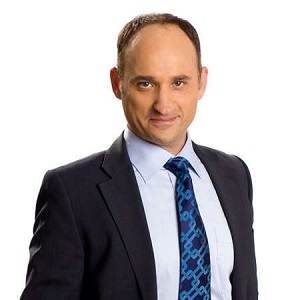 David Visentin isn’t a single man anymore. He is married to Krista Visentin since 7th October 2006.

David and his wife together have a son, Logan and they live in Orlando, Canada.

Who is David Visentin?

David Visentin is a Canadian actor. David is also a real estate Agent and television host. He is best known as the co-host of the house listing show, Love It or List It along with Hilary Farr.

He is also known as the contributor to the Canadian daytime television talk show, The Marilyn Denis Show.

David Visentin was born on June 28, 1965, in Toronto, Ontario, Canada, and of British-Irish-Canadian ancestry.

He was raised in Canada with his father Nick Visentin. But his mother’s and academics’ details are unknown.

Also, he has a brother and a sister.

David began his career in 1987, working as an agent for Country Living Realty along with his father Nick Visentin in Barrie, Ontario.

He worked on the housing market for over 16 years and he discovered new potential homes for numerous clients at that time.

He began his film and television career in 2008. He was signed on by Big Coats Productions as one of the hosts of the W Network series, Love It or List It in 2008.

Further, he is still working as the co-host of the show. In 2011, he appeared as himself in an episode of Kortney & Dave: By Request.

In 2012, David Visentin appeared as himself in an episode of The Marilyn Denis Show for the first time. Since then, he has made several guest appearances on the show and he is still working as the contributor to the show.

He started appearing as a Celebrity Judge in Brother vs. Brother (with the Property Brothers) since 2013.

In 2015, he made a guest appearance in an episode of This Hour has 22 Minutes in which he appeared as himself.

David also contributes to various news agencies such as the Canadian Press.

David Visentin has auburn hair and blue eyes. His height is 5 feet 8 inches and weighs 70 kg.

His spouse's name is Krista.

Is David on Love It or List It really a real estate agent?

He is working as an actor and realtor.
Logan Paul