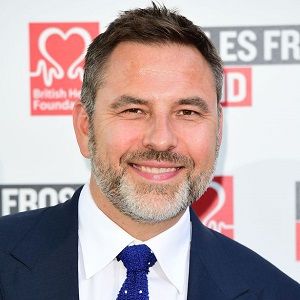 All you can do in this life is follow your dreams. Otherwise you're just wasting your time.

A bully can only make you feel bad about yourself if you let them.

What is the relationship of David Walliams?

Furthermore, the couple was spotted many times in public. Currently, the pair has maintained a healthy relationship between them and living elegantly.

David and Lara have a son named Alfred born on 6 May 2013. However, they couldn’t carry on their relationship for so long time and divorced after five years of marriage on 4 March 2015.

David also had a relationship with Lauren Budd, Geri Horner, and Candice Falzon. Furthermore, the famous comedian has also dated a couple of beauties such as Emily Scott, Lisa Snowdown, and Ashley James.

Who is David Walliams?

David Walliams is a British comedian and actor. Furthermore, he has a partnership with Matt Lucas on the BBC One sketch show Little Britain.

Besides this, David has been a judge on the ITV talent show Britain’s Got Talent since 2012. In addition, he is also an author as his books have sold more than 12.5 million copies worldwide. H

e has also appeared in the  BBC series Partners in Crime as Tommy Beresford.

David was born on 20 August 1971, in the London Borough of Merton, the United Kingdom.

His father, Peter Williams was a London Transport engineer, and his mother, Kathleen Williams was a lab technician. Talking about his early life, he grew up in Banstead, Surrey.

His ancestry is English and his nationality is British.

From the beginning of his childhood, he had a keen interest in acting and began to perform at a very early age.

Concerning his education, David attended Collingwood Boys’ School in Wallington. Later, he completed his graduation from the University of Bristol with a Bachelor of Arts.

David Walliams began his career at the National Youth Theatre. At there, David met Matt Lucas and they both performed in The Club as well as in the documentary series Sir Bernard’s Stately Homes.

Furthermore, they also acted in the Paramount Comedy Channel show Mash and Peas. The pair got huge recognition for their show Little Britain which ran from 2003 to 2009 on the BBC followed by Come Fly with Me on BBC One.

In addition, he appeared on the BBC One sketch show Little Britain from 2003-2005. David has also played the alien Gibbis in the sixth series of Doctor Who, “The God Complex”.

Later in 2012, he began to judge the ITV talent show Britain’s Got Talent with Amanda Holden, Alesha Dixon, and Simon Cowell.

For his brilliant judging, he got the award at the National Television Awards as Best Judge. Additionally, he has featured in more than 20 TV series such as Asylum, The Strangers, Walliams and Friend, and much more.

Apart from that, the British comedian has also appeared in several movies such as Shaun of the Dead, Stardust, Justin and the Knights of Valour, and a few more.

Being a popular author, David has also published around two dozens of books. His debut novel was The Boy in the Dress on 1 November 2008. Just after one year, he released a book called Mr. Stink, in which a 12-year-old girl meets a tramp and helps look after him.

Moreover, his other popular books include Billionaire Boy, Gangsta Granny, Awful Auntie, and a few more. In addition, he has also hosted some sports events.

So far, David has won the award for Best TV Judge at the 2015 National Television Awards. Furthermore, he has also received the Lincolnshire Young People’s Book Award in the 9-11-year-old category with his book, Mr. Stink followed by the ‘Landmark Achievement Award’.

Being a successful actor and author, David earns a healthy amount of money from his profession. Currently, he has a huge net worth of £17 million as of 2022.

Once, he was dragged into a controversy after he posted a photo of himself on Instagram kissing a dolphin.

Furthermore, many of his fans on social media have also called him racist after he dressed in a Kim Jong-un costume on Halloween.

David Walliams has a towering height of 6 feet 2 inches and weighs 92 kg. Moreover, he has dark brown hair and dark brown eyes.

David is pretty active on social media. Furthermore, he regularly updates his photos, news, and videos on his social accounts.

Audrey Leybourne Dead: Britain’s Got Talent star Passed Away at 95