David Wright is an American former professional baseball third baseman who played 14 seasons in the Major Leagues and was voted the “Face of MLB.” David is straight and in a marital relationship with his long-time girlfriend Molly Beers.

Regarding his relationship status, David is straight and in a marital relationship with his long-time girlfriend Molly Beers. She is a model. Likewise, they married on 26th December 2013.

Similarly, they have two daughters, named Olivia Shea (born in July 2016) and Madison (born in May 2018), and a son, Brooks David (born in October 2020). The family is currently living in Manhattan Beach, California. 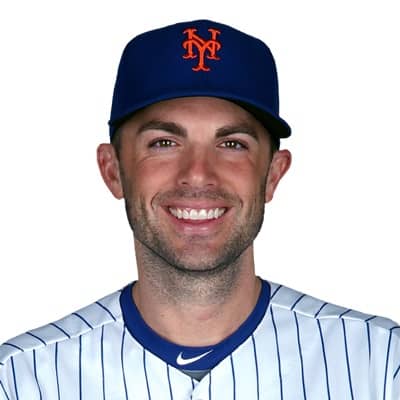 “I do like to wear the same hat on game days, but I consider that more of a routine thing than a superstition.” “When I first got to the majors in 2004, female fans held up signs asking me to marry them. Those girls today were what, 13, 14? I'm 23, but that's a little young even for me.”

Who is David Wright?

David Wright is an American former professional baseball third baseman who played 14 seasons in the Major Leagues and was voted the “Face of MLB.” He retired as the team’s fourth captain and the franchise leader in hits, runs, and RBI. He is a special adviser in the Mets front office.

He was drafted by the Mets in the 2001 MLB draft and made his MLB debut on July 21, 2004, at Shea Stadium. Wright was nicknamed “Captain America” after his performance in the 2013 World Baseball Classic.

On 20th December 1982, David was born in Norfolk, Virginia, United States of America. He holds American citizenship. Similarly, talking about her religion and ethnicity, he follows Christianity and belongs to a Caucasian ethnic group.

About his family members and siblings, David’s father’s name is Rhon Wright, a police officer in the Norfolk Police Department, and her mother’s name is Elisa Wright. Likewise, he has three brothers named Daniel, Matthew, and Stephen.

Furthermore, talking about his educational background, David completed his high school at Hickory High School in Virginia. He played baseball during high school. Moreover, Wright committed to playing baseball at Georgia Tech before his senior year of high school.

David turned his passion for playing baseball into his career. Likewise, he started his career with the Mets in the 2001 MLB draft. It was during the supplemental round as compensation for the Mets’ loss of Mike Hampton to the Colorado Rockies.

David, along with Jose Reyes was National League Co-Player of the week in June 2006. Furthermore, in the same year, they participated in Major League Baseball Japan All-Star Series along with Julio Franco, and John Maine.

In December 2008, David was a member of Team USA in the 2009 World Baseball Classic which was held in March 2009. In mid-august of 2009, Wright was hit in the head with a 93 mph fastball by San Francisco Giants pitcher Matt Cain.

He was admitted to the hospital; however, he left the next day diagnosed with post-concussion symptoms. This was the first time in his career that he was on the disabled list. Although by September, he resumed.

After undergoing an examination by the doctor’s team on 16th May 2011, it was reported that David had a stress fracture in his lower back. It resulted in him being on the disabled list for more than two months.

Again, he was selected in the 2013 World Baseball Classic to play third base. The tournament ended with David’s most total RBIs.

Wright has earned $161 million in MLB salary alone. That’s enough to make him one of the 25 highest-earning baseball players in MLB history.

David Wright was suspended by the network yesterday evening for remarks he made that ended up in a video created by Project Veritas, the conservative group that records “undercover” footage of journalists and then spreads it to the masses, doing so in order to bolster what it believes is bias in mainstream media.

Talking about his physical appearance, David has a dark brown pair of eyes and brown hair.