Davon Godchaux has been dating a beautiful girl called Chanel Iman since 2022. Iman is an American model best known for her work as a Victoria’s Secret Angel. It’s unclear when and how Iman and Godchaux got together.

Their relationship is going well still and there is no sign of any split up or break up in their relationships. We might see them as a happily married couple if everything goes well.

Godchaux has a son from a previous relationship named Davon Godchaux II who is now 6 years old. 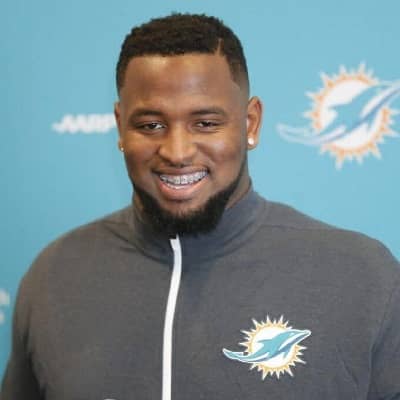 Who is Davon Godchaux?

Devon Godchaux is an American football defensive tackle for the New England Patriots of the National Football League (NFL). Godchaux also played college football in Louisiana. Likewise, he was ranked as the No. 22 defensive end prospect by ESPN.

Likewise, Devon was born to his father Raynard Parker, and mother Albertha Godchaux. Davon’s father was imprisoned at the time of his birth.

Moreover, he is of Afro-American ethnicity and American nationality. His birth sign is Scorpio.

Furthermore, he graduated from Plaquemine Senior High School and joined the Louisiana State University in Baton Rouge, Louisiana, in 2014. He played for the LSU Tigers football team and majored in sports management.

Davon Godchaux started as an All-State defensive lineman in Plaquemine Senior High School. His stats was 60 tackles, 22 tackles for a loss, and 4.5 sacks in his junior season in 2012. After some achievements, he joined Louisiana State University over Mississippi, Auburn, and UCLA among others.

At Louisiana State University, he appeared for 26 games for the Tigers in three seasons. Likewise, he compiled 62 tackles, 8.5 tackles for loss, 6.5 sacks, one pass defended, and two fumble recoveries as a junior. After the 2016 Citrus Bowl, He declared for the 2017 NFL Draft.

Davon was picked 178th overall in the 5th round of the 2017 NFL Draft by the Miami Dolphins. However, he was listed on the reserve list by the team on August 5, 2020, but activated from the list after two days. On March 23, 2021, New England Patriots signed him to a two-year, $16 million deal.

Davon was nominated for the Walter Payton Man of the Year award for his excellent performance in his third season with the Dolphins.

His net worth is not available and his asset value is under review. However, New England signed him to a two-year, $16 million deal in the 2021 offseason.

There are no rumors and controversies about his personal or professional life.

Talking about Davon’s body measurements, he has a height of 6 feet 3 inches and has a weight of 141kg. Additionally, Godchaux’s hair color is black, and has the black color of eyes.