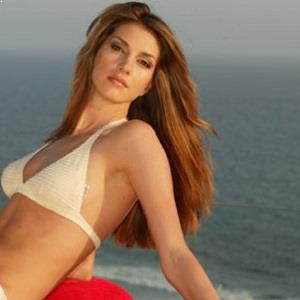 I have a sweet tooth for reading, so books migrate to my zip code en mass.

Probably the worst pickup line is no pickup line. I mean, at the end of the day, what is the worst that could happen?

I believe acting to be my own journey through connection more than anything else, but that's only my take on it.

What is the relationship of Dawn Olivieri?

Previously, she dated filmmaker Bryn Moose and actor Don Cheadle before but neither sides confirmed on this relationships.

Who is Dawn Olivieri?

Dawn Olivieri is an American television model who is best known for her role as Monica Talbot on the television series House of Lies’ and as Janice Herveaux in the HBO series True Blood.

Beautiful Dawn Olivieri was born in Seminole, Florida on 8th February 1981. She was born to Salvatore A. Olivier and Nancy Covill Olivier with American nationality.

Further, she is of a Mixed (Italian, Irish) ethnic background. Her father had jewelry and pawnshop in Seminole, Florida.

Her sister Bettina is also an actor. She loves animals since childhood and desired to be a vet when she was young.

Dawn graduated from the University of South Florida and majored in chemistry. She played bassoon during high school.

Tall and sexy Dawn Olivieri has begun her acting career journey in 2004 and she is still currently active in the entertainment field. She debuted in the television series ‘The Player’ as herself in 2004.

After then she started to appear on numerous shows with a short role including ‘CSI: Crime Scene Investigation’ as a stripper, Las Vegas’ Sheri, ‘How I Met Your Mother’ as Anna, Entourage’ as costume fitting girl, ‘Lucifer’ as Lt. Olivia Monroe, and ‘Rosewood’ as FBI Agent Harrows.

She even started to appear in the movies. She debuted in the movie ‘The Devil’s Den’ portraying the character of Jezebel. Her career took on a successful path when she got the main role of Monica Talbot in the television series House of Lies’ in 2012. After onwards she started appearing in hit series such as ‘True Blood’ and ‘The Vampire Diaries’.

Besides her acting journey, she has even appeared in video games giving a character a voice in ‘Need for Speed: Undercover as Rose Largo’ and in ‘inFAMOUS 2’ as NSA Lucy Kuo. Her net worth varies depending on the source, as of 2022, she has an estimated net worth of $7 million.

Although Olivieri is rumored to be married, she hasn’t come forward to tell if it’s the truth or just some rumor.