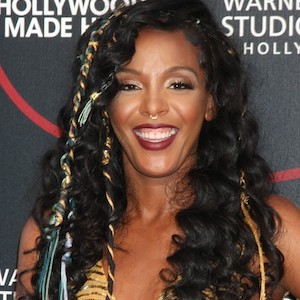 Be exactly who you are. You can fit in any space you see yourself in. Be fearless.

I wake up every day in a different headspace, so on any given day, my hairstyle will change.

You don't need validation from other people. You've gotta find it within yourself and sit in it and roll with it.

She told it was Mosley’s infidelity that broke them up in a radio interview for ‘Sway in the Morning’. She was also in a relationship with Dustin Breeding.

Talking about the present relationship of Dawn Richard, she is possibly single. There isn’t any solid proof which leads to her married life and children. Being a celebrity, her fan followers are always curious to know more about her personal and love life.

Who is Dawn Richard?

Multi-talented Dawn Richard is an American singer, songwriter, actress, and animator. She is best known for her album like ‘Goldenheart’, ‘Blackheart’, and ‘REDEMPTION’.

Born as Dawn Angelique Richard on 5th August 1983 in New Orleans, Lousiana. She was born in a family of an entertainment field. Her father, Frank Richard is a lead singer and percussionist of Chocolate Milk band and her mother owns a dancing school. She spent much of her childhood developing her choreography and singing skills. She has one brother.

While she was in her teenage, she began performing in her local New Orleans group, ‘Realiti’. She is of Mixed(Creole and Afro-Haitian) ethnicity and has American nationality.

Talking about career journey of Richard, she is active in the entertainment field since 2005 and still currently active in it. She started her career after auditioning for the MTV show ‘Making the Band 3’ in 2004. She became a girl band member of dainty Kane in 2005 and began releasing songs. In 2008, her song ‘Phase’ was leaked onto the internet which featured Lil Wayne. She confirmed in an interview that her band has split up on January 27, 2009, and she joined Diddy-Dirty Money.

She became the first member of Danity Kane to release a professional music after their split up. She left Diddy-Dirty Money and started a solo career from the year of 2011. Richard released her first promotional single ‘Save Me From U’ in January 2012. She soon released her next single ‘Bombs’ with a music video which earned huge success. She released her first album ‘Goldenheart’ on 15 January 2013 and with the success, she again released another album ‘independently’.Then she continued releasing hit albums like ‘Black \heart’ and ‘Redemption’. She has worked with superstars like Flo Rida, Ne-yo, and Lil Wayne.

Besides her singing career, Richard was also featured in a commercial on the opposition of California’s Prop 8. She posed naked for a PETA as a campaign promoting the lifestyle. She has partnered with Coco & Breezy to release her own line of sunglasses. In 2014, she launched a collection of women’s shoes via Lust for Life. She also worked as a content creator with Adult Swim. Her success in her career path paid her well financially making her net worth estimated to be $ 2.5 million.

Richard suffered a controversy when she was a member of American girl band Danity Kane. There have been rumors afloat about her alleged plastic surgery on her body.