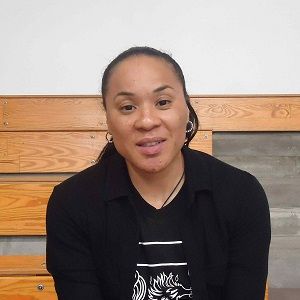 There have been no any instances of mentions about her personal relationship info.

This includes her relationship past and history, current status, etc. Similar is about her marital status. Her personal relationship info matters are a well-kept secret to date.

Who is Dawn Staley?

Dawn Staley is an American basketball Hall of Fame player and coach. Staley is a three-time Olympian & was elected to carry the US flag at the opening ceremony of 2004 Summer Olympics.

In 2011, Staley was voted in by fans as one of the Top 15 players in WNBA history. She was elected to the Naismith Memorial Basketball Hall of Fame in 2013.

Staley was born Dawn Michelle Staley on May 4, 1970, in Philadelphia, Pennsylvania, USA. Her nationality is American and ethnicity is Afro-American.

She was named the national high school player of the year during her final season at Murrell Dobbins Tech High School in Philadelphia.

Staley attended the University of Virginia in Charlottesville, Virginia.

During her 4 seasons in college, she led her team to 4 NCAA Tournaments, 3 Final Fours & 1 National Championship game. She was named the ACC Female Athlete of the year and the national player of the year in 1991 & 1992.

In 1994-1995, after graduation, she began playing professional basketball in France, Italy, Brazil, and Spain before joining the ABL and then the WNBA.

She joined the Richmond Rage of the ABL in 1996 and led the team to the ABL Finals in 1997. Staley was named the 1996-1997 All-ABL first team and the All-ABL second team, the following season.

In the 1999 WNBA Draft, Charlotte Sting selected with the ninth overall pick, Staley. In 2001, she led the Sting to the Championship game of the WNBA playoffs.

On August 1, 2005, Staley was traded to the Houston Comets. Staley announced before the start of the WNBA season that she would be retiring after the Comets season was over.

Staley competed with USA Basketball as a member of the 1992 Jones Cup Team that won the Gold. She played for Team USA throughout her career.

In 1994 she competed in the World Championships and was named the USA Basketball Female Athlete of the Year.

She led the 1996 team to the gold medal at the Olympic games in Atlanta and was a member of the 2000 Olympic team that defended the gold medal.

Staley was named to the USA national team in 1998. The national team traveled to Berlin, Germany in July and August 1998 for the FIBA World Championships and then held on to win the gold.

In 2002, Staley was named to the national team which competed in the World Championships. The USA team won all nine games, including a close title game against Russia.

She won a third gold medal with Team USA at the 2004 Games in Athens and was named 2004 USA Basketball Female Athlete Of The Year.

Staley had no interest in coaching when she was initially approached by the athletic director of Temple. She was on the Olympic team at the time.

Staley initially resisted offers to become the coach. She was still playing in the WNBA & her friends told her it would be impossible to continue to play & coach.

That challenge convinced her she should try so she accepted the position of head coach at Temple University. On her first season, 2000–01, Temple advanced to the WNIT.

During 2004–05 season, Staley’s Owls lost in the second round of the NCAA Tournament.

Staley reached the 100 win plateau in the A-10 Semifinals vs Xavier University that season, becoming the fastest coach in women’s basketball to achieve that.

On May 7, 2008, it was confirmed by Temple University that Staley would leave Temple for University of South Carolina.

Staley became the second African American to lead a women’s basketball team to a national championship.

Staley herself was awarded SEC coach of the year 3 times & Basketball Times Coach of the Year in 2014.

Dawn served as an assistant coach for the USA National team in 2006, 2008 Summer Olympic Games.

The USA basketball organization awarded her the code national coach of the year award.

She served as an assistant coach for the 2016 Summer Olympic Games. On March 10, 2017, she was named head coach of USA National team.

There are no much significant rumors and controversies surrounding her. She has, thus, managed to keep her public image clean.

Dawn has a height of 5 feet 4.5 inches. Her body weighs 58kg. She has black hair and black eyes.