Soccer player Dax McCarty is married and a father of one. 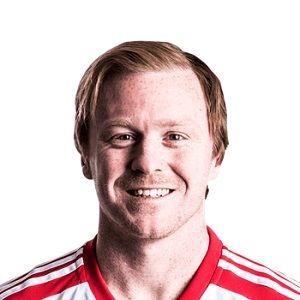 It's been a really crazy month, I'll say that. I think I've slept in my bed maybe twice the past month and a half. That comes with the territory of being a pro athlete, and I've enjoyed every minute.

Dax McCarty is a married man. He exchanged vows with his college sweetheart, his long time girlfriend, Jennifer Zyski.

Dax and Jen met in their college almost a decade ago. They tied the knot on January 14, 2017, in a beautiful ceremony.

Then in 2019, this couple was blessed with a child. They named their son Callum Jerry McCarty.

Who is Dax McCarty?

Dax McCarty is a professional soccer player from the United States. Currently, he plays for Nashville SC as a midfielder.

He has also played for New York Red Bulls and FC Dallas. Recently, he has also lifted the 2017 Gold Cup trophy with the national team.

He was born to Cynthia McCarty (mother) and Dart McCarty (father) on April 30, 1987, in Winter Park, Florida, United States.

He grew up with his family in Winter Park, Florida, and belongs to Caucasian ethnicity.

From his childhood, he started playing soccer in his hometown. Talking about his education, he joined Winter Park High School.

Later, he attended the University of North Carolina at Chapel Hill for just one year. In his college career, he appeared in 45 games scoring four goals for his side.

Initially, Dax McCarty signed with FC Dallas to begin his professional career. On July 1, 2006, he made his professional debut against Chivas USA. His first goal came against Los Angeles Galaxy on September 23, 2007. As a vital player for his side, he scored the winning goal against Real Salt Lake.

From the 2012 season, he was known as the best player in the club. He started to assist regularly for the New York Red Bulls. After his brilliant performance for the club, he was named captain on March 8, 2015. Dax smashed a cracker in a victory over his former club D.C. United. In total, he appeared in 169 matches for the club and netted 14 goals.

Furthermore, Dax moved to the Chicago fire on January 16, 2017. The season became a huge success for him and the club. He left this club in 2019 and from 2020 joined another football club named Nashville SC.

2011 was a pretty successful year for him as a national player where he also captained his country in a couple of matches. After five long years, he earned his international cap in the 2017 Gold Cup.

Moreover, he has also won the 2017 CONCACAF Gold Cup with the United States.

After transferring from Chicago Fire, he criticized New York Red Bulls for mishandling his contract. Later he stated, “From the outside looking in it looks like losing almost became accepted and culture of losing with this club almost became the norm.

From the front office, down to the players, down to all the staff. It almost just seemed like they were indifferent about winning and that’s crazy to me. That’s insane.”

In 2016, there was controversy when the Chicago Fire reached the top of MLS(Major League Soccer) from the last place.

Dax McCarty has a height of 5 feet 9 inches and weighs 68 kg. He has light brown hair and his eye color is grey.