American Actor and is popular in the world for portraying his role in the movies like 'Employee of the Month', 'Without a Paddle'.

Dax Shepard met actress Kristen Bell, also native of Detroit’s northern suburbs, at the birthday party of a mutual Friend; they began dating in late 2007. The couple announced their engagement in January 2010.

However, They decided to delay marriage until the date of California passed legislation legalizing same-sex marriage. After section 3 of the Defence of Marriage Act was ruled unconstitutional by the Supreme Court on June 26, 2013, Kristen asked Dax to marry her through twitter, which Dax accepted.

They were at The Beverly Hills country Clerk’s office on October 17, 2013. They have two daughters: Lincoln Bell Shepard, who was born march 28, 2013 and Delta Bell Shepard who was born on December 19, 2014.

As of January 2012, both were Vegan. In June 2013 they both were Sexiest Vegetarian Celebrities of 2013 by PETA. In a Tweet, Dax said he could not accept the Award because he had begun eating meat again six months before. 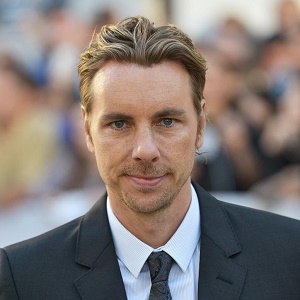 So if you're on the motorcycle, on the track you're not thinking at all about what's happening next week or tomorrow or anything. You're literally thinking about the turn you're setting up and there's something about that I find very cathartic and meditative

I've had plenty of good times and have settled peacefully into quite a boring existence that I love. I had enough fireworks and chaos. It is a blissful boring life, believe me

All of my free time is made up of motor sports endeavors, be them motorcycles or off-road racing or track days. I just love anything with an engine. That is one of my main loves. Obviously, my other well-known love is Kristen Bell.

Who is Dax Shepard?

Dax Shepard is an American Actor and is popular in the world for portraying his role in the movies like ‘Employee of the Month’, ‘Without a Paddle’, and much more. He has also established himself as a Comedian, Writer, and Director.

Dax  Shepard was born as Dax Randall Shepard in Milford, Michigan, the United States of America. As of 2021, he is 46 years old.

Dax is an American and of North American ethnicity.

He was born to Laura (Labo), Shepard who worked at GM, and DavShepard, Sr., a car salesman. His mother is of French –Canadian and Belgian descent.

With both his parents working in the automobile industry, Dax’s first love was cars. Dax was raised in a middle-class family.his parents divorced when Dax was just 3 years old.

Dax’s mother ended up growing a huge business by the time he was in high school. From age of 14 to 28, he worked for his mother on, going from the racetrack to the racetrack. For about 2 years, Shepard had a stepfather who was an engineer on the Corvette. Dax’s mother has been married four times-Dax said he’s had, three stepfathers.

According to Dax, his mother named him for the rich playboy Dax (Diogenes Alejandro Xenos), in Harold Robbins’ novel The Adventurers. He has an older brother, David Shepard, who lives in Oregon, and a younger half-sister, Carl Hatter, who he cast in his 2012 film Hit and Run.

As a child, he once revealed that he had no interest in acting but was funny in his acts as he was also the clown of his class in school.

Although he had friends who did stand –up in Detroit, he was too scared. Dax thought if he moved to California “that commitment would force him to do it”.

Shepard graduated from Walled Lake High school in 1993 and moved to California in 1995.

Dax Shepard moved to Los Angeles in 1996, after a year living in Santa Barbara, California.

He found out about The Groundings improve troupe from a friend from Santa Barbara, Kareem Elseify, ended up auditioning (the first time he acted), and took classes while attending UCLA.

After about five years of classes, he got into the Sunday Company of The Groundlings- in a group that included Melissa Mccarthy, Tate Taylor, and Nat Faxon.

However, with the course of time, he became more interested in acting and he finally made his acting debut in 1998 in the movie, Hairshirt.

From 2003 onwards, Shepard became known for his work in the improved Candid Camera-type show, Punk’d, with Ashton Kutcher. When the show had its 2012 revival, he continued to appear.

Dax said he auditioned for Punk’d and while doing the pilot became friendly with Kutcher, who arranged for him to get an agent. He auditioned unsuccessfully for 10 years before he landed the role.

In 2004, Dax starred in the comedy Without a Paddle, alongside Seth Green and Mathew Lillard.

The film received negative reviews but was a commercial success, grossing $69,631,118 worldwide. From 2010 to 2015, Dox was part of the main cast of NBC drama Parenthood, playing Crosby Braverman.

Dax Shepard wrote, produced, co-directed, and starred in the 2012 low-budget film Hit and Run alongside Bell and his close friend Bradley Cooper. Dax had a supporting role in the 2014 film The judge, which starred Robert Downey Jr., Robert Duvall, and Vera Fa.

Till now he has appeared in more than dozens of movies and television series.

Dax Shepard: Salary and Net Worth

He has a net worth of $40 Million but his salary is not revealed yet.

Dax is a very honest guy and also a very hardworking guy. There have been no such Rumors and Controversy over Dax Shepard to date.

Dax Shepard has a height of 6 feet 2 inches. His body weighs 88kg.

Furthermore, also find out more about the early life, career, net worth, relationships, and controversies of actors like Joshua Jackson, Brooks Ashmanskas, and Vincent Pastore.

‘It takes a lot of hard work’: Kristen Bell opens up about marriage affair with her husband Dax Shepard