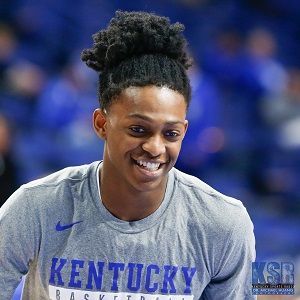 De’Aaron Fox has kept his personal life private and out of the spotlight. He usually doesn’t talk about his private life in media and public. He prefers people focusing on his work rather than his personal life.

Who is De’Aaron Fox?

De’Aaron Fox is an American basketball player and plays for Sacramento Kings of the National Basketball Association. He has also played for one season of college basketball for the Kentucky Wildcats.

He had taken part in the McDonald’s All-American, Jordan Brand Classic as well as Nike Hoop Summit games and has earned a name as Texas Mr. Basketball in the year 2016.

The professional basketball player De’Aaron Fox was born on 20th December 1997 in Louisiana, USA. He is the son of Aaron and Lorainne Harris-Fox and has one sibling Quentin Fox.

When he was a child he had some nicknames like “Fox”, “Vegeta”, “Swipa”, and “Swipa da Fox” which referred to the latter being the villain from children’s TV series Dora the Explorer.

According to his high school coach, he used to go school at 6 am as well as practices gym every day. Even his dad said that he would sleep on the couch almost every night and play the NBA 2K video game which is the reason for him to become a player that he is today.

About his education history, Fox hasn’t mentioned about his secondary school life. But he has studied his high school Cypress Lakes (Houston, Texas).

After the completion of high school, he had joined the University of Kentucky and continued his basketball career. There he had scored 21 points and 3 assists in a 93-69 victory over the Canisius College in the Bluegrass Showcase on 13th November 2016.

When his Freshmen came to an end he announced that he would forgo his final three years of collegiate eligibility and enter the 2017 NBA draft.

On January 2016, he was named as a McDonald’s All-American and played the American Game in March. In the same year he was the nation’s consensus top point guard, was ranked the consensus No. 6 overall player by the four main recruiting services Rivals, ESPN, Scout, and 24/7 Sports.

On January 2017, he had scored 27 points and 6 assists in a 97-71 victory over Arkansas as well he had poured in 21 points and 5 assists defeating Mississippi State 88-81. Similarly, on the March 2017, he had played a Sweet 16 matchup against the UCLA Bruins and scored 39 points.

When his freshmen came to an end he had announced that he would forgo his final three years of collegiate eligibility and enter the 2017 NBA draft.

De’Aaron Fox had also recorded 18 points and 7 assist in a 106-98 victory over the Denver Nuggets in January 2018. In the month of February, he was named Lonzo Ball’s replacement for the Rising Stars Challenge.

Unlike other basketball players Aaron Fox hasn’t achieve many medals to date but he has made the leading scores of the 2016-2017 Kentucky Wildcats basketball team.

De’Aaron Fox’s Salary and Net Worth

His income is unknown and net-worth is estimated to be $5 million.

Unlike other players, De’Aaron Fox hasn’t suffered from any kind of rumors or controversy. He has kept his life very secretive and away from social media as well as sites.

Moving towards Fox’ body measurements, he has a height 6feet 3 inches. His weight is 79 kg. He has black hair color and his eye color is also black. Besides these, there isn’t any information about his body structure.