Blessed with excellent skills in electronics, he displays a variety of styles in his works and uses different forms of electronic music.

They both have similar tattoos, one of which is the number 289m3d22h, on their arms, which symbolizes the day they met.  They also have two black stars underneath their eyes. They broke up briefly in November 2012 but rekindled their romance again.

On December 15, 2012, Deadmau5 proposed to Kat on Twitter and they got engaged. They had announced that they would get married in August 2013 with an aquatic-themed wedding. He shifted base to LA to live with Kat. However, Kat announced that they had called off their engagement in June 2013.

Currently, he has tied the knot with Kelly Fedoni after he split from Kat Von D. The couple got engaged in January 2016 while vacationing in the Maldives. They got married on August 12, 2017. 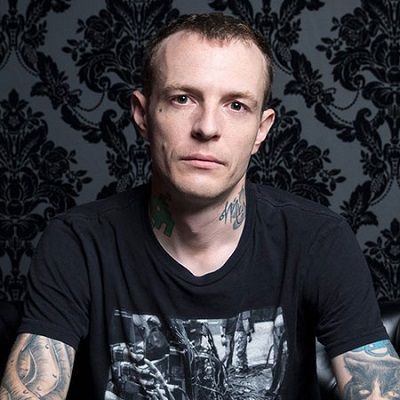 I don't believe there's a cap on creativity and passion.

I'm a video game enthusiast. I love video games! They were a huge part of my upbringing in their early form when I was all about 'Dig Dug' and 'River Raid.' As they evolved, so did my music-making, and we just kind of grew up together like cool friends.

Everybody's all up on the EDM bandwagon now, because it's, like, another viable conduit for traditional pop music to ride for a bit so they can get out of their little stagnant pool and make a dance hit.

Deadmau5 is a famous Canadian electronic DJ/dance artist and record producer. Blessed with excellent skills in electronics, he displays a variety of styles in his works and uses different forms of electronic music.

He has worked with several famous DJs and producers on a number of releases.

Additionally, he has received six Grammy Award nominations for his work. Likely, he has worked with other DJs and producers, such as Kaskade, MC Flipside, Rob Swire, and Wolfgang Gartner.

Talking about his education, he graduated from Westlane Secondary School in Ontario.

Talking about his profession, Deadmau5 started his career in animation and web designing. Later, he entered the music world as a DJ, touring Europe and South America for gigs with his own limited resources. He also worked with online music licensing company as a programmer. He adopted the name deadmau5, as he found a dead mouse in his computer when he was a teen.

Additionally, the album had two different releases—a limited CD release and a demo CD release. He re-released ‘Messages from Nowhere’ on his compilation album ‘Stuff I used to do’ in 2017. Play Digital released his second studio album ‘Vexillology’ on November 6, 2006.

Likewise, he started his own record label, mau5trap, in 2007. Whereas, the album featured popular singles like ‘Animal Rights’, ‘Some Chords’, ‘Sofi Needs a Ladder’, and ‘Raise Your Weapon’. In 2011, he released two non-album singles ‘Aural Psynapse’ and ‘HR 8938 Cephei’.

In the same month, he left Ultra Records and signed with Astralwerks. His seventh studio album ‘while1<2’ was released on June 17, 2014, by mau5trap and Astralwerks in the US and Canada and by Virgin EMI Records internationally.

In early 2017, he released a compilation of his earlier works from 1998 to 2007, titled ‘Stuff I used to do.’ The limited version of the album featured 13 tracks instead of the 16 he had announced earlier. Some of these tracks were ‘Messages From Nowhere’, ‘HaxPigMeow’, ‘Long Walk Off a Short Pier’, and ‘Creep’.

In addition, he has also collaborated with Steve Duda under the group name BSOD (Better Sounding On Drugs), and was part of the group named WTF? with Duda, Tommy Lee, and DJ Aero.

He won the International Dance Music Awards thrice and was nominated for Grammy Awards six times.

He has an estimated net worth of around $53 million (as per 2020 data) and he has earned that sum of money from his professional career.

There was a rumor that this producer had killed a child. Currently, he is far from rumors and controversies.

Deadmau5 has a height of 5 feet 9 inches. Additionally, he weighs 74Kg. In addition, his chest, waist, biceps size are 38-32-13 inches respectively.