Singer Dean Geyer's wife is Jillian Murray. He is married.

Dean is now married to an American actress Jillian Murray. They started dating in 2010 and announced their engagement on 18 December 2016. The couple tied the knot on 14 September 2017.

Previously, he was in a relationship with Lisa Origliasso of the Australian duo in 2007.

They met at the 2007 ARIA Awards. And in April 2008, Origliasso also publicly announced that they were engaged. Although, the couple gets separated later.

The singer was also rumored to be dating an American actress, singer, Caitlin Stasey in July 2010. 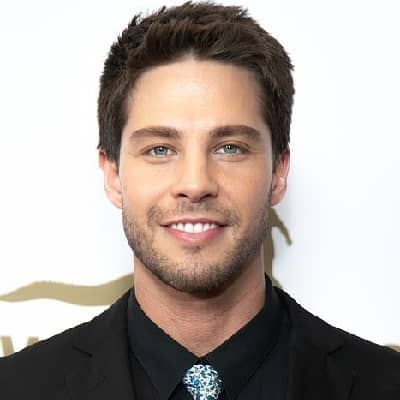 I've always played nice guys, so I'd love to be someone that creates a bit of confrontation. I know that sounds bad, but as an actor, I want to explore different things.

I've always been one of those people that, if I am angry, I just hold it in. And I always kind of, like, wrote it in a song and put it aside for myself because it helps me get it out. It's almost like exercising

Who is Dean Geyer?

He is popular for appearing in the talent show Australian Idol ending up with a third runner-up. Further, he is also the cast of the US show Glee in the 4th season as NYADA Junior Brody Weston.

Dean was born on 20 March 1986 in Johannesburg, South Africa. His family has a strong connection to martial arts. His family members from previous and current generations received ‘black belts’ in karate.

In 1980, Dean’s father, Keith Geyer with his uncle, Derrick Geyer also appeared in the South African martial arts film Kill or be Killed. Likely, his mother’s name is Debbie Geyer. He has two younger sisters, Jess Geyer and Tatum Geyer.

Geyer was passionate about music from his early childhood and learned to play guitar. He wrote his first song “Change” where he wrote about migrating from South Africa to Australia.

He completed his schooling at Melbourne High School. It was a selective entry, an all-boys school in South Yarra, Victoria.

Dean was also part-time modeling for the agency ‘Scene models’ in his hometown in Melbourne. He has done various modeling at the initial start of his career.

Geyer’s interest in music was in his early teens. And so it leads him to the singing competition, Australian Idol audition in 2006 fourth series. He has auditioned with his self-composed song ”Nice to Meet You”. After his performance, three of the judges were praised leading him up to the Top 100.

During the culling rounds in Sydney, where the Top 125 are cut down to the Top 24, Geyer survived to reach the next round. He ended up in third place during the final round. Following the show, Dean signed a record deal with Sony/BMG and released a single called “If you don’t mean it, which peaked on the Aria charts at #10.

Dean formed a band known as ”Third Edge” in 2004 and recorded his original music at Studio 52. In the year 2007, he gains more popularity by featuring on the TV show Saturday Disney. His album ‘Rush’ came in at number 7 on the Aria charts.

He made his American television debut on the VH1 Drama television series known as Single Ladies in July 2011. He has also maintained a recurring role on the Fox Network Steven Spielberg.

Geyer also played Rachel Berry in the fourth season of the Fox musical comedy-drama television series Glee in July 2012. Dean made his first appearance on Glee in the series premiere episode “The New Rachel.” The show was premiered on 13 September 2012 to over 7.41 million viewers.

He has played Daniel in the Georgian film, Landmine Goes Click in 2015 opposite Sterling Knight and Spencer Locke. Further, he starred in the movie, Rehearsal. Besides, he is also in production for the TV crime drama known as Shades of Blues, which star Jennifer Lopez. He appeared in 3 episodes.

As of 2022, Dean’s estimated net worth is around $1 million. He amassed a huge fortune from his professional singing and acting career.

An entry-level actor has around $2,921 per week and an average salary of an actor is around in the US is $57299. Moreover, his film Never Break Down was made on a budget of $3 million in September 2010.

He was rumored to be dating an American actress, and singer, Caitlin Stasey in July 2010. Apart from it, he is not been in any sort of controversy until now.

Also, get to know about Lori Singer, Brec Bassinger, and Christopher French.