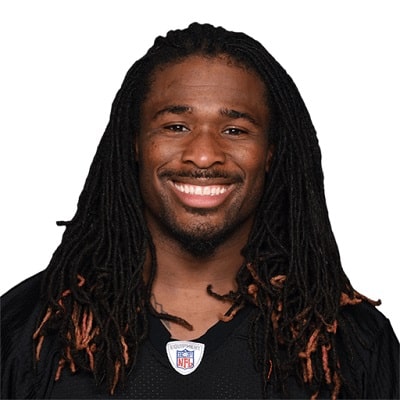 As a football team, we don't have any backups. We don't consider anybody a backup.

When my number is called, nobody cares if I am a starter or not. They just care if I make plays or if I'm productive.

DeAngelo Williams is a married person. He has been married to his longtime girlfriend Risalyn Burzynski since 23 July 2016. The couple is blessed with a son and two daughters. A daughter of his is named Rhiya Williams.

Who is DeAngelo Williams?

DeAngelo Williams is a former American football player. He played for Carolina Panthers from 2006 to 2014 and for Pittsburgh Steelers from 2015 to 2016. Also, he played college football at Memphis.

He was born on April 25, 1983, in Wynne, Arkansas, USA. His birth name is DeAngelo Chondon Williams. He was born to parents Odell Hill and Sandra Hill(diagnosed with breast cancer in 2004). Unfortunately, his mother died in May 2014 battling the illness. Also, he has a sibling, a sister. Moreover, four of his aunts also had breast cancer.

Williams holds American citizenship but his ethnicity is African-American.

He joined Wynne High School and then enrolled at the University of Memphis where he played for Memphis Tigers football team.

He used to play football in both high school and college days. Williams was a  letterman in track & field but could not play in his sophomore season due to a broken bone in his foot.

Besides footballer, he is also a wrestler and had appeared on the April 2, 2017, episode of Impact Wrestling but soon announced his retirement on July 5, 2017. But, he announced his return to wrestling for Impact on  July 2, 2018.

Williams was named 2004 Pro Football Weekly All-America Team and Conference USA Offensive Player of the Year for the third straight year. Also, he became NFL rushing touchdowns leader in 2008 and in 2015.

He has an estimated net worth of around $16 million and he has earned that sum of money from his professional career. His salary and income are under review.

Williams has been successful in keeping himself far from rumors and controversies in his personal and professional life.

DeAngelo Williams has dark brown eyes and black hair. He has a height of 5 ft. 9 inches and weighs 94 kg. His shoe size, dress size, etc. are no available.