Deanne Bray is a language advocate, storyteller. Deanne is married to a deaf actor and a mother of one. 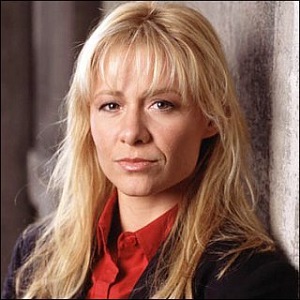 Deanne Bray has been married to her long-term boyfriend, Troy Kotsur since 2001. Tory is also deaf and an actor as well.

The couple welcomed a cute daughter, Kyra Kotsur on September 8, 2005, and she is glad to be a mother. She encourages and teaches her daughter to learn and understand sign languages and English languages from her early ages. She is currently living in North Hollywood.

Who is Deanne Bray?

Deanne Bray is a talented American actress. He is best known for her recurring role as Sue Thomas in the show ‘Sue Thomas: F.B. Eye’.

She is also popular for her recurring role as Emma Coolidge on ‘Heroes’. She was born deaf and is bilingual in American Sign language and spoken English.

She is completely deaf in the right ear and used a hearing aid in her left ear as her left ear receives some residual sounds.

She was born on May 14, 1971, in Canoga Park, Los Angeles, California, USA. Her birth name is Deanne Lee Bray. She is currently 47 years old. Deanne has not disclosed information regarding her parents, and siblings.

Deanne holds American citizenship and her ethnicity is Caucasian.

She achieved her B.A. degree in Biology at California State University at Northridge. She received her master’s in Sign Language Education(Linguistics) from Gallaudet University. She is pursuing her master’s degree in education.

She was first discovered when she was performing with the Deaf dance troupe ‘Prism West’.

She got her breakthrough from the TV series ‘The Pretender’ in 1996 in which she portrayed the role of a deaf woman. Then, she played Juliet in ‘Elle’ in 1997, and in the same year, she made her appearance in ‘Diagonist: Murder’ as Jan Curran.

She made her appearance in the episode ‘Rescue Me’ in 2004 and appeared as Amy in ‘The L Word’. Her other appearances include in the series ‘Law and Order: Criminal Internet’ which was aired in 2006 and in 2009, she played in ‘heroes’ in various episodes of the series.

Recently, she portrayed the role of Joanne Mors in ‘Two Broke Girls’. She also worked with California’s Deaf West Theater and the National Theater of the Deaf.

She is also a strong advocate and established ‘The Little Bookworm Club’ in order to promote literacy. She also wrote a book with her colleague in 60 days and titled that book ‘Grow with Your Child’. The book was about for hearing parents with Deaf children filled with games and activities to learn sign language. Specific grammatical features were also included in the book.

She was awarded Grace Award in the category Actress from ‘Sue Thomas; F.B. Eye’ in 2006.

She has an estimated net worth of around $5 million which she earned from her professional career.

She has maintained her celebrity status as she has not been involved in any rumors and controversies in her professional career.