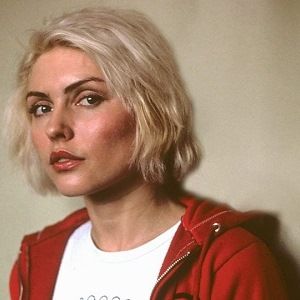 She's a really sweet person. I've met with her a couple of times and hung out with her socially. She's just a sweetie. She's probably capable of a lot of things she hasn't been asked to do yet, and doing something that's sort of left of center would be great for her.

The only place left for rock to go is toward more girl stars. There's nothing left for men to do. There's bound to be more male stars, but they can't express anything new.

Why should you force your brain cells to remember a lot of stuff when the most important thing you can do is to come up with new stuff? For me you know, I'm just writing now and trying to think of things that take the twist with a lot of the stuff. Why should I sit here and be chronological or like a time machine with old information? It doesn't make sense to me.

What is the reationship status of Debbie Harry?

Debbie Harry is not married and does not have any children. She was once in a relationship with guitarist Chris Stein with whom she had formed the band Blondie.

They were separated in 1989 after 16 years of affair. She was also linked with Penn Jillette, Cal Chamberlain, Joey Ramone, and Iggy Pop

Who is Debbie Harry?

Debbie Harry was born in Miami, Florida, in the United States on July 1, 1945. Her birth name is Deborah Ann Harry and she is currently 77 years old.

There is no information about her siblings. Debbie holds American citizenship and mixed (English- Scottish) ethnicity. Her birth sign is Cancer.

Talking about Debbie’s education history, she graduated from Hawthorne High School in 1963. She went to Centenary College from where she graduated in 1965 with a degree in Associate of Arts.

Talking about her profession, Debbie Harry began her musical career began in the late 1960s when she joined the folk-rock group, ‘The Wind in the Willows’ as a backing singer.

The band released one album in 1968. She joined the band ‘The Stilettos’ in 1974 and performed with Elda Gentile and Amanda Jones. Whereas, guitarist Chris Stein also became a member shortly after her joining.

The band became famous following the commercial success of their debut album. Sharp-featured and pretty, she caught the attention of her fans with her platinum-blonde hair and glamorous looks.

She became a sex symbol and was soon a punk icon. She became such an inherent part of Blondie that people thought it was her name!

Blondie’s 1978 album, ‘Parallel Lines’ provided them with the breakthrough they needed. It peaked at No.1 in the U.K. and also performed well in the U.S.

In the year 1989, she released ‘Def, Dumb & Blonde and started using her original name “Deborah” professionally. It had the hit single, ‘I Want That Man, and the tracks ‘Kiss it Better and ‘Maybe for Sure’.

Her solo album ‘Debravation’ was out in 1993. The album was unsuccessful. After a gap of 14 long years, she brought out her album, ‘Necessary Evil’ in 2007.

She promoted the album on Cyndi Lauper’s True Colors Tour where she performed a number of songs from the album.

She was nominated for Best Original Song-Motion Picture for American Gigolo (1980) at Golden Globe Awards.

She was nominated for Best Supporting Female for Hairspray (1988) at Independent Spirit Award. She won Worst Supporting Actress for Deuces Wild (2002) at Stinker Award.

She has an estimated net worth of around $30 million (as per 2022 data) and she has earned that sum of money from her professional career.

To date, she has not been part of controversy and rumor.

She is maintaining her personal life properly. She is far from rumors and controversies.

Debbie Harry has a height of 5 feet 3 inches. Additionally, she weighs is 58Kg.

Debbie’s hair color is blonde and her eye color is green. Furthermore, her dress size is 6 (US) and her shoe size is 8.5 (US).